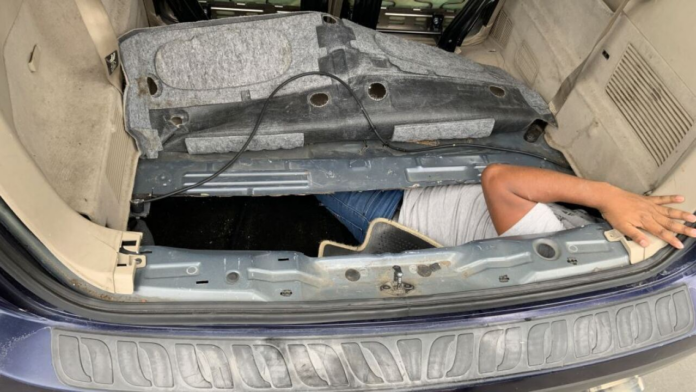 SAN YSIDRO, California. (KGTV) — Border Patrol agents say they may have busted a smuggling attempt after they found three men hidden and locked away in a specially-built compartment in an SUV at the San Ysidro entry point last week.

According to the San Diego Sector Border Patrol, the incident happened on Friday, April 1 around 11 a.m. Agents say a 29-year-old man from the U.S. was driving a 2007 Hyundai Veracruz and applied for entry at the San Ysidro border crossing.

While at the inspection booth, a CBP officer checked out the SUV and noticed a person inside the spare tire compartment in the rear cargo area of the vehicle.

Authorities say the driver was removed and escorted to a secure area and the SUV was immediately taken to an inspection area. During further inspection of the vehicle, CBP officers found a non-factory compartment in the cargo area of the SUV with three men hidden inside.

“A person’s life is always in danger when smugglers use specially built compartments to smuggle people across the border,” said Sidney Aki, Director of Field Operations for CBP in San Diego.

“Smugglers will stop at nothing to achieve their goals, even if that means risking human lives.”

The CBP officer took the men ages 29, 24, and 21 from the compartment and escorted them to a secure location for further processing. All three men were Mexican natives and agents say they did not have status or documents to legally enter the United States. The men will be returned to Mexico and CBP officers seized the SUV.