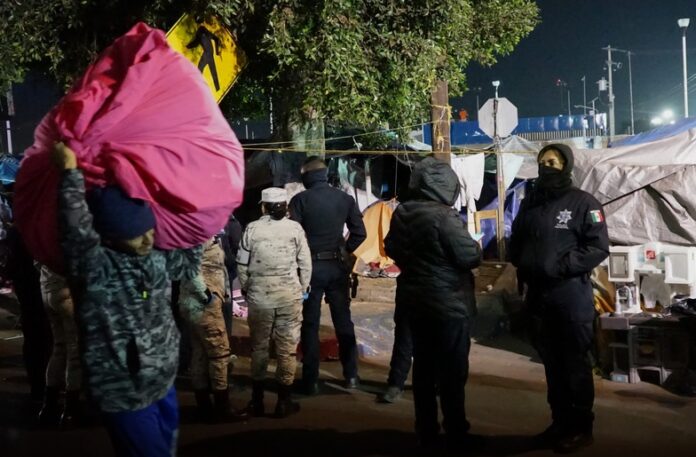 About a hundred members of the police, National Guard, and Army on Sunday, Feb.6th, evicted 381 migrants, mainly Central Americans and Mexicans, from a makeshift camp they had been staying in for almost a year in Tijuana at the U.S. border crossing.

The migrants’ tents around El Chaparral crossing were demolished with the help of excavators and trucks while their inhabitants loaded their few belongings into bags and suitcases to be transferred to three local shelters.

“It was a relocation that had to be carried out carefully to avoid a collapse,” Tijuana Mayor Montserrat Caballero Ramírez told reporters, saying the families were living in a state of “insecurity” for health reasons.

Caballero Ramírez said the eviction was carried out peacefully and denied that the decision to take down the camp was in response to U.S. pressure.

“You know that Tijuana is governed by its own legal norms,” she said.

The 381 migrants, made up of 86 families, 24 single mothers with children, 33 men, and three members of the LGBT community, were moved to the Migrant Integration Center shelter, the Salesian project, and the Migrant Sanctuary, she said.

“It’s inhumane because they did it at dawn and the children were asleep,” said Mexican migrant Guadalupe Omeca, who had lived in the camp for seven months with her three children, grandson, and her partner.

The “El Chaparral” camp began forming at the end of January 2021, with the arrival of the Biden administration, after U.S. authorities began to limit the flow of migrants in compliance with policies that force migrants to wait in Mexico for their immigration court hearings as well as for pandemic health measures.

The camp had become a headache for authorities in both countries because it was affecting traffic through one of three pedestrian crossings to the U.S. city of San Diego.

Activists and humanitarian organizations had expressed concerns about the situation of the migrants, many of them children, living in the makeshift camp. Last year, Mexico’s National Human Rights Commission urged Mexican authorities to guarantee respect for the human rights of the migrants and to offer them protection.

“Central American migrants and displaced Mexicans are human beings. They do not represent a threat to Mexico,” said Wilner Metelus, president of the Citizen Committee in Defense of Naturalized and Afro-Mexicans, on his Twitter account, calling the camp eviction a “shame”.

Honduran migrant Marleni Hernández complained that authorities treated them “as if we were criminals.”

“It’s hard, it’s not easy,” she said, her eyes brimming with tears as she acknowledged she felt very vulnerable being in a foreign country with two young daughters.