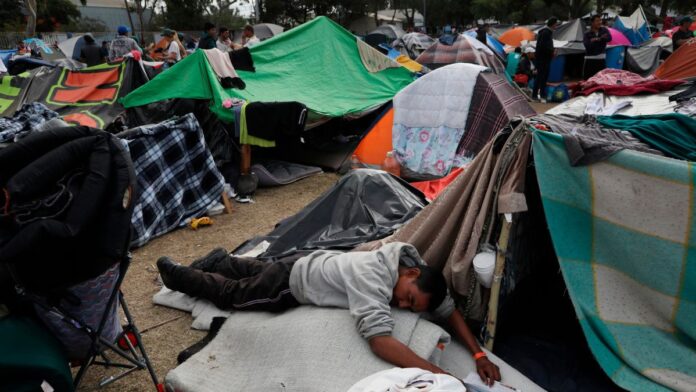 Authorities on Sunday, February 6th, broke up a camp of about 380 migrants, mostly from Mexico and Central America, in Tijuana, near the US border.

Mexican migration officials announced that they were trying to relocate the people in the area just south of San Diego, California.

Migrants were told they would be allowed to bring to shelters three changes of clothes but not additional items.

“There were people who began to leave and began to climb of their own free will, without using public force, onto the trucks that go to the different shelters,” the city’s mayor, Montserrat Caballero, told reporters.

She said that the agents who participated in the operation were unarmed.

But the move sparked annoyance among many migrants who lived in the camp, which had been there for just under a year.

“What they are doing to us is wrong and inhumane,” said Rosalía Mejía, a woman from the southern Mexican state of Guerrero, who had been living in the camp for six months with her three children.

“I’m going to go to a relative if possible,” she added.

A Honduran woman named Maritza also demanded the action of the authorities.

“How do they want one to find a way to enter the United States?” she added.

After the eviction, the authorities began to destroy the tents used by the migrants as well as clothing and household items such as televisions and furniture.

Dozens of migrants, mainly from Central America, cross Mexico to seek asylum in the United States in the face of violence and poverty in their countries.

And along the way many become victims of organized crime or of the Mexican authorities themselves.

Migrant arrivals to the United States declined markedly during the initial phase of the Covid-19 pandemic but began to pick up later in 2020, before surging since US President Joe Biden took office in January last year.

On December 9, a trailer carrying 160 irregular migrants crashed into a pedestrian bridge on a highway in Chiapas, leaving 56 dead, mostly Guatemalans.