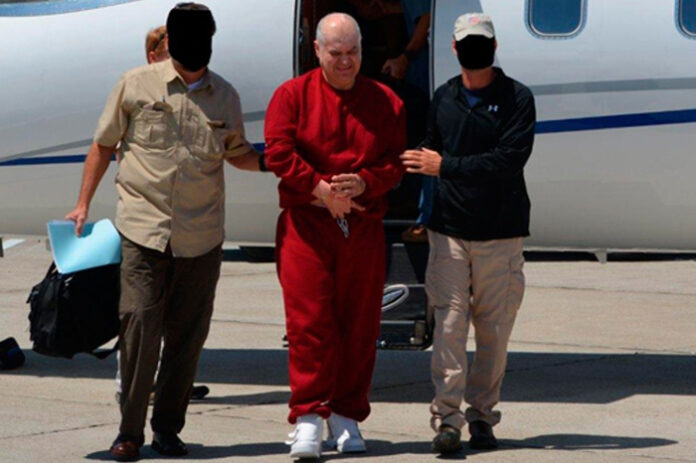 Eduardo Arellano Félix, who once helped lead an eponymous Tijuana drug cartel alongside his brothers, was released from prison on Wednesday, August 18th, after serving the majority of his 15-year sentence. But where he goes next is unclear.

On Tuesday, Mexican Foreign Minister Marcelo Ebrard said his government was informed that Arellano Félix will not be deported to Mexico upon his release, citing a change in his “status” and the possibility he is being considered a protected witness by the United States.

Ebrard told reporters during the daily morning news conference at the National Palace that the U.S. has no obligation to explain the reasons behind a change in detainee status but that more information may be forthcoming.

As of Tuesday, Arellano Félix, 64, was detained at a low-security prison in Allenwood, Pa., according to the U.S. Bureau of Prisons. An agency spokesperson confirmed the projected release date but said information about transfers, release plans and immigration detainers is not released due to “privacy, safety and security reasons.”

U.S. Immigration and Customs Enforcement was not able to provide information on his immigration status Tuesday.

If not deported, he is to be supervised by probation officers for three years following his release, according to the terms of his sentence.

Arellano Félix, nicknamed “El Doctor” because he holds a medical degree, was the chief financial officer for the Arellano Félix Organization, or AFO, which sent tons of cocaine and marijuana north into the United States and gained power in a particularly bloody era of cross-border violence.

A San Diego federal judge sentenced Arellano Félix to 15 years in prison in August 2013 for laundering tens of millions of dollars in illicit drug proceeds. It was the maximum sentence under the terms of the plea deal.

When taking into account custody credits, the former cartel leader has now served his sentence. He was detained in Mexico for nearly four years before his extradition, and he also would have been eligible for good-behavior credits in the U.S. prison system that would allow him to be released after serving 85 percent of the term. At the time of sentencing, his defense attorney had called him a “model prisoner.”

Arellano Félix was the last of the brothers to be sentenced, following a years-long, binational push to dismantle the organization.

He was a key advisor to Benjamín, who led the cartel during its rise in the late 1980s and early 1990s.

After the 1993 shootout at the Guadalajara airport between the AFO and the Sinaloa cartel that killed a Roman Catholic cardinal, Eduardo retreated further behind the scenes, according to court documents. He lived isolated in heavily protected homes in Tijuana for the next 15 years, dropping largely out of daily operations but still helping launder the cartel’s riches through real estate and other acquisitions.

Nothing has been released publicly to indicate Eduardo has cooperated with government authorities, as did his younger brother, Javier, who led the organization after Benjamín’s 2002 arrest.

Benjamín is serving a 25-year sentence, while Javier is serving a life sentence as part of a special witness protection program designed for cooperators still behind bars.

Another brother, Ramon, who was the cartel’s enforcer, was killed in a shootout with police in Mazatlán in 2002.

Vestiges of the Arellano Félix Organization are still in Tijuana, where the historic rivalry between the group and the Sinaloa cartel continues to cause bloodshed. Many AFO members have aligned themselves with the Jalisco New Generation Cartel in its battle for the region against the Sinaloa, which wrested control of the area from the weakened AFO in the 2000s. Another much smaller AFO branch continues to fight both outsider cartels.

If Eduardo is ultimately deported, it would be up to the Mexican federal attorney general whether to detain him and charge him with Mexican crimes, Ebrard said Tuesday.

The younger Zambada has cooperated with investigators since his 2010 extradition to Chicago and in 2019 spilled secrets about the cartel his father still heads by testifying in the Brooklyn trial against co-leader Joaquín “El Chapo” Guzmán. Zambada was released on an unspecified date earlier this year, authorities said in May, and his whereabouts are unknown.