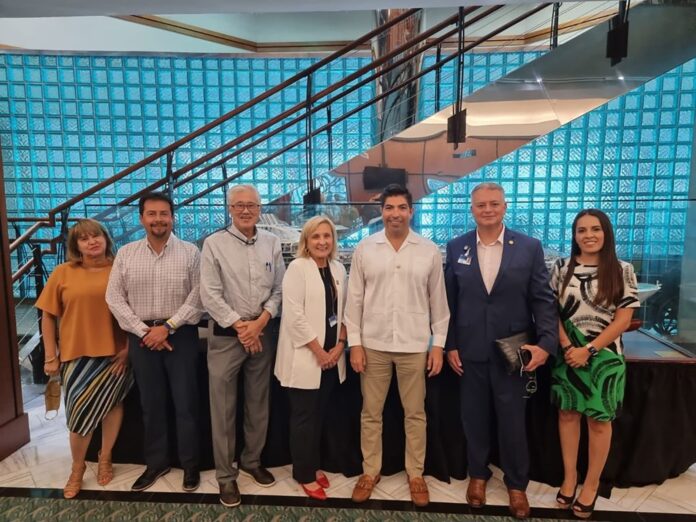 After meeting with the Florida-Caribbean Cruise Association, the mayor confirmed that the Royal Caribbean shipping company will return to Ensenada, after more than a decade

Within the actions for the economic reactivation in the municipality, President Armando Ayala Robles held a meeting with Michalle Paige, president of the Florida-Caribbean Cruise Association and Russell Benford, Vice President of Government Relations of Royal Caribbean Cruises, where it was announced that as of August, tourist cruises will return to the Ensenada port.

Armando Ayala stated that the tentative date for the return of cruise ships, with technical arrivals, is the month of August and in September there will be moorings with tourists on board.

The municipal president of Ensenada highlighted that one of the most outstanding achievements is that, after 12 years, the Royal Caribbean shipping company returns to Ensenada with two cruises per week, this would be from November 28.

“This is extremely important news because we will consolidate ourselves as the number one destination in the Mexican Pacific for tourist cruise arrivals. It is important to specify that no passenger who is not vaccinated against Covid-19 will be able to go down to the destination ”.

HE TALKED ABOUT THE IMPROVEMENTS IN THE CITY
The first mayor reported that during the meeting with shipping managers, he explained the investments that are being carried out in terms of infrastructure and modernization of public spaces.

“We explained everything related to the forthcoming start of the rehabilitation of the Transpeninsular Highway, the Chapultepec-Maneadero section, which will strengthen road safety for tourists who come to La Bufadora.

We also announced the investments that have been made and that will be made in the coming months in terms of public safety. We also address the fact that in Baja California more than 70 percent of the population is vaccinated against Covid-19, ”he said.

Likewise, he said, we promoted the new tourist attractions that we will have in Ensenada, such as the observation wheel and the scenic tower, which will be added to the existing ones.

The representatives of the cruise terminal, added the mayor, spoke about the dredging works that have been carried out to receive the vessels, in addition to receiving the formal request for a third position for arrivals of larger vessels.

“This issue will be analyzed to see what would be the characteristics of the construction of the third pier. It was also agreed that new mechanisms will be made to promote tourist attractions ”, he stressed.