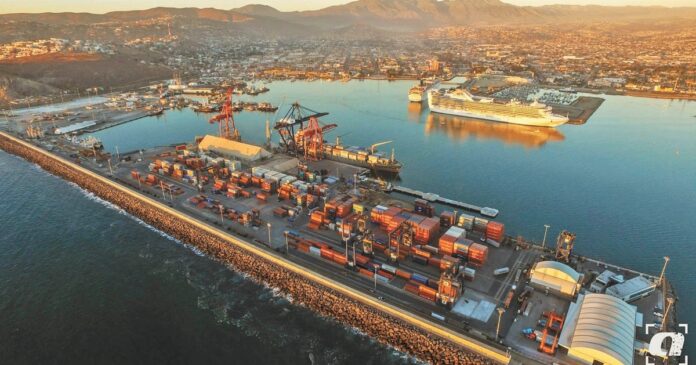 Businessmen and the government will sign on July 1 the agreement to develop the project that will link the seaports of Tapachula, Manzanillo and Ensenada.

Guadalajara, Jal. With the aim of developing the southeast of the country through internal trade via cabotage, the Private Initiative (PI) and federal authorities will sign, on July 1, the agreement to develop the sixth maritime highway of the country, which will connect the south-southeast, central-western and north-northwest regions, through the seaports of Tapachula, Chiapas; Manzanillo, Colima, and Ensenada, Baja California.

The project seeks “that the center-west can move products to the south-southeast already with added value; that investors from the central-western and north-northwest region go and invest in this privileged region with tax exemptions, a favorable VAT and ISR collection rate as in the north of the country, but above all, that we can connect via cabotage to the different Mexico’s and generate competitiveness,” the president of the National Association of Agrifood Councils told El Economista, Jacobo Cabrera Palos.

He anticipated that within the framework of the First Mesoamerican Congress of agri-food councils to be held on June 29 and 30, July 1 and 2 in Tapachula, Chiapas, representatives of the federal government and the private sector of the three regions involved will sign the agreement to start the sixth maritime highway of the country from 2022.

“There are already emblematic products that have a great demand such as bananas; the Soconusco region is the most productive region, and if you connect Tabasco, Guatemala and El Salvador with Tapachula, the opportunity to ship that product to California is impressive,” he said.

Jacobo Cabrera explained that, in February of this year, the country’s agri-food councils started the program to constitute Mexico’s sixth maritime highway involving the secretariats of agriculture and navy.

“A project with economic indicators was presented where we gave sustainability to a project to connect the ports of Tapachula, Chiapas; Manzanillo, Colima, and Ensenada, Baja California. And then an interconnection in the south-southeast: Tapachula with all of Central America,” he said.

The leader of the sector stressed that only eight states in the center-west produce 54% of the country’s perishables that make it the most productive area in Mexico, while the north-northwest is the area of greater connectivity and trade with the United States.

Then, “this sixth sea road becomes highly profitable (…) It is the first road that was born as a request of the IP, with a strategy to develop regions; that’s its main value,” he said.

“Businessmen do not have colors, we do not have affiliations; what we are looking for is the development of companies and as leaders of organizations, we want to be facilitators so that this trade and negotiation is generated”.

Jacobo Cabrera stressed that this road involves great challenges such as developing the Soconusco area and all the alternate regions to Chiapas, establishing quality and productivity indexes, and with added value.

“An important part is the obligation to bring technology and transformation to the Chiapas countryside,” he said.

He stressed that, currently, the profitability of the southeast region is generated in Guatemala and not in Mexico, so the intention to give connectivity to that area of the country is to develop its productivity for export purposes.

The First Mesoamerican Congress of Agrifood Councils is expected to include federal and state officials, governors and elected officials from the three regions that will make up the maritime highway, as well as the Central American countries involved in trade with Chiapas and development finance, who will present investment models, and some shipping companies interested in developing Puerto Chiapas.

The SCT launched the Maritime Highways program in June 2020, as a strategic project to increase the movement of goods on short routes between Mexican ports and neighboring countries.

The first maritime highway is made up of the ports of Tampico, Veracruz, Progreso and Santo Tomás de Castilla, to increase the flow of cargo, reduce costs and generate employment in the south-southeast region of the country.

Where are foreigners coming from and where do expats live in Mexico?