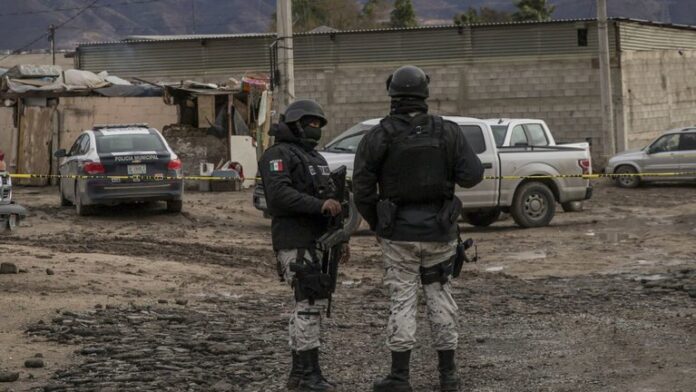 GESI reported 11 homicides in the last 24 hours, most of them were in Tijuana

The violence does not stop in Baja California. In less than five hours, five people were killed this Sunday in different parts of Tijuana.

The first incident occurred at 05:00 in the morning, when a taxi driver was killed on Golfo de California Street, in the Camino Verde neighborhood, after he had left a passenger.

According to the newspaper Milenio, the victims were a man and a woman who were not immediately identified. Both showed signs of blows to the head, but it will be the legal autopsy that confirms the true cause of death.

In another event that occurred minutes before, a young man was taken by his family to the emergency room of the Red Cross hospital, in the Los Santos neighborhood, where despite receiving medical attention, he was unable to survive.

Two other men were shot during the morning, one in the Guerrero neighborhood and the other in the Libertad neighborhood, both were transferred in serious condition to different hospitals and so far, their health status has not been reported.

The State Security and Investigation Guard (GESI) reported 11 homicides that occurred in the last 24 hours throughout the state. Most of the violent events took place in the city of Tijuana. Another three occurred in the municipality of Mexicali and one more in Tecate.

Given the increase in violence registered in Baja California in recent months, the Government of Mexico will intensify its presence to eradicate the structural causes that originate it.

The strategy for the ” Promotion of the Culture of Peace and the Reconstruction of the Social Fabric “, initiated in Mexicali, will be in charge of the Ministry of the Interior ( Segob ), through the Undersecretariat of Democratic Development, Social Participation and Religious Affairs.

This model will be implemented, in the first instance, in the Valle de Puebla, Ángeles de Puebla, Residencial Monarca and Valle del Pedregal neighborhoods, and will have the objective of presenting measures that respond directly to the needs of the residents.

Among the points to be strengthened are community participation, economic reactivation, health, community care, respect for the environment, urban spaces, education for peace, good coexistence, culture and historical identity, gender perspective and youth.

Adriel Noriega López, coordinator of Strategy and Analysis for the Social Prevention of Crime and the Reconstruction of the Social Fabric, highlighted the importance of establishing a close dialogue with the three levels of government, the academic and business sectors, as well as with the inhabitants of the municipality to reverse the insecurity and fragmentation of society.

This mechanism has already been implemented in Acapulco, Guerrero, and derived from the ‘Sessions of Understanding for the Promotion of the Culture of Peace and Reconstruction of the Social Fabric’, led by the Minister of the Interior, Olga Sánchez Cordero, and the Undersecretary Rabindranath Salazar Solorio It was agreed that it will also be replicated in Ecatepec, State of Mexico; Monterrey, Nuevo Leon; Benito Juárez, Quintana Roo, and Tapachula, Chiapas.

One of the main organized crime cells that plague Baja California is that of Los Cabos, a branch of the Jalisco Nueva Generación Cartel (CJNG). This practically new criminal organization is considered a primary target due to the level of violence that they carry out in the north of the country. According to the authorities, Los Cabos are a group of thugs formed since 2015 in Tijuana, Baja California, in order to facilitate the trafficking of heroin and methamphetamine on the northern border.