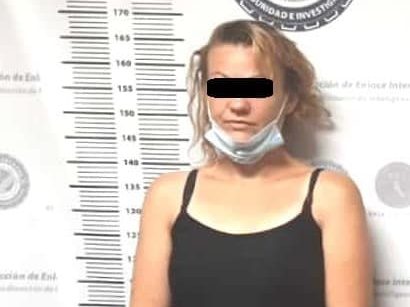 In 2016, she was detained by the United States authorities after trying to cross methamphetamine through the Mexicali-Calexico checkpoint.

Melanie “N”, 33 years old and originally from Arizona, United States, was detained by the State Investigation Guard (GESI) in Mexicali Baja California after the Yuma authorities requested support for the capture of this fugitive.

According to the Baja California State Attorney General’s Office (FGE), the US Marshals Liaison Office shared that the woman was detained in 2016 during a second search at the Mexicali-Calexico border port, when crossing 23 pounds of methamphetamine. hidden inside a Toyota Yaris vehicle.

Melanie spent several months in a federal prison in the neighboring country, but upon obtaining her conditional release, she fled to Mexicali, where there were even possibilities that she lived in a home in the Baja California neighborhood of said municipality.

Given this, an arrest warrant issued by the United States was issued, on March 26, 2021, for the crime of importing methamphetamine.

A GESI operation allowed his capture. Once the corresponding procedures had been completed, Melanie was handed over to the US authorities.