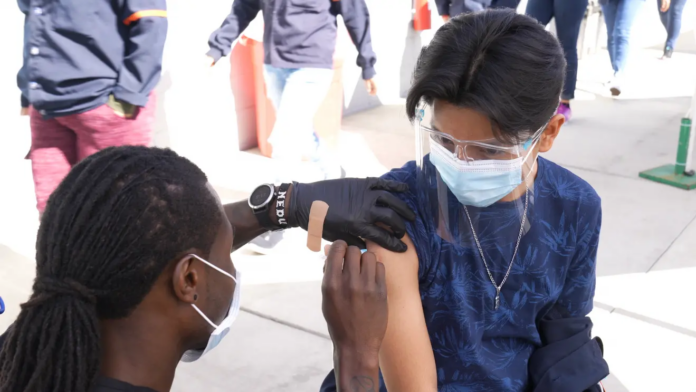 Due to the complex logistics required to vaccinate over 10,000 people, the single-dose Johnson & Johnson vaccine was selected for this clinic.

Thanks to the Consulate General of Mexico in San Diego and the County of San Diego, the Tijuana-San Diego cross-border vaccination program began last Monday, the head of the Ministry of Foreign Affairs, Marcelo Ebrard Casaubón, reported on Tuesday.

This program consists of vaccinating Mexican employees of US maquiladoras located in Baja California, at the San Ysidro-El Chaparral port of entry.

The vaccines provided by the County of San Diego were free of charge and consists of a shipment of 10,000 vaccines from Johnson & Johnson, which are being applied by the University of California at San Diego (UCSD).

According to what was presented by the Foreign Minister, at least 150 and 200 Mexicans in Tijuana are receiving the anti-covid vaccine, per hour.

“It is the first agreement that we have of a cross-border nature. Its purpose is to try to equalize the percentages of vaccination, especially in cities with greater interconnectivity, such as Tijuana and San Diego, ”said Ebrard.

He also commented that this agreement is local and not between the governments of both nations. In addition to local authorities, the private sector is involved.

This program is expected to be replicated in the rest of the border cities.

For his part, the Consul of Mexico in San Diego, Carlos González Gutierrez, shared on his Twitter account:

“Today the Chancellor @m_ebrard announced the start of the cross-border vaccination program for Mexican workers in maquila companies, a local initiative promoted by @SanDiegoCounty, @UCSDHealth, @ConsulMexSdi and the binational private sector / @SupFletcher @SupNoraVargas.”