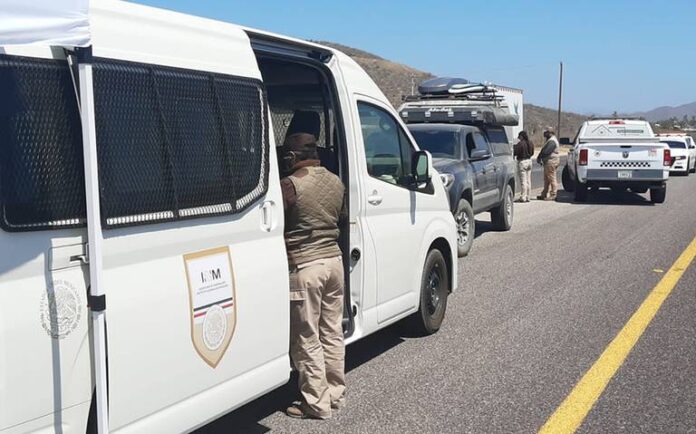 Last week 2 Americans were deported from the Yucatan

Baja California Sur.- 4 foreigners were transferred to the offices of the National Institute of Migration (INM) in Cabo San Lucas, and 403 submitted to document review, in an operation that federal representation carried out. carried out at kilometer 59 of the Todos Santos-Cabo San Lucas highway section, within the framework of an operation in which the National Guard also participated.

The representative of the INM in the entity Manuel Salvador Cordero Esparza reported that this operation was carried out in response to an instruction sent by the General Directorate of Coordination, in relation to the strengthening of control and verification activities of foreigners in Mexico

The event took place near the town of El Pescadero, with the aim of verifying the migratory situation of foreigners who travel through this route and of informing and advising on procedures carried out in the offices of the INM.

As a result, documentation was reviewed for 403 foreign citizens and 257 foreign vehicles, and 4 foreigners were arrested and transferred to the Immigration Station; two of Cuban nationality who were traveling by bus from San José del Cabo to Tijuana, and whose immigration documents were altered; a Spaniard who did not have a valid immigration document, and a citizen of North America origin who did not have the necessary documents to prove their legal stay in the country.

Among the most important operations that the INM has carried out in Todos Santos, the one at the beginning of 2016 stands out, after the North American guitarist Peter Buck meddled in internal politics during a rally in the public square of Pueblo Mágico, in where the foreigner launched a harangue in which he called the politicians corrupt and ordered the public to “take control of the town”, alluding to “voracious developers” and what he called “merchants of Cabo”, among others.

After this event, which was preceded by a march in which foreigners also participated, elements of the INM implemented an operation to find the Americans and eventually apply article 33 of the Constitution to expel him from the country, although this was not possible because he had previously left the site and returned to the United States; Along with him, a large group of Americans left who are presumed to be illegal in Mexico.

“El Wachis”, operator and hitman of the Sinaloa Cartel, arrested in Ensenada