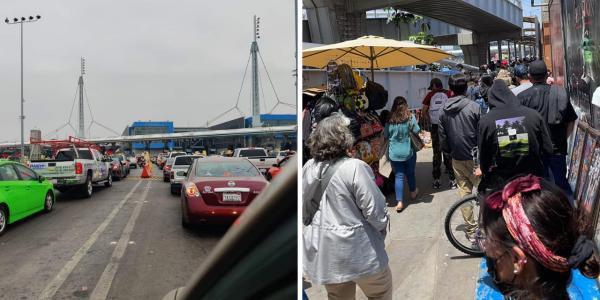 In Facebook circulate several publications show users where the excessive increase in waiting time to cross from Tijuana to San Diego, mainly in the ranks for pedestrians.

In the Otay checkpoint, both in the pedestrian and vehicular lanes, a waiting time of 5 hours was detected, once inside the area to enter the neighboring country. Even intervals of more than 30 minutes are recorded where no progress is observed. Regarding the San Ysidro pedestrian crossing, the situation is not very different, since a similar delay and progress that is practically null or too slow is still being diagnosed.

The president of the Smart Border Coalition, Gustavo de la Fuente, told Uniradio Informa that this phenomenon is mainly due to 3 factors: the first of these is caused by the advance of vaccination and the economic recovery that this entails in San Diego since about 50% of the residents in the county have already been fully immunized against covid-19, which causes safety in people and motivates to carry out the border crossing to a greater extent.

Another element that delays the entry of people to the United States is the increase in migrants who try to enter the country illegally, either through traditional crossing lanes or by vehicle, a situation that has caused the deployment of elements even greater borderlines in the area.

In early May, CBP elements reported that the increase in illegal crossings affects normal operations at the different border crossings in Baja California since it has been necessary to relocate personnel and resources to ensure the entry process, the same as originally they would be destined to the normal operation of the line and its advance.

The last factor is also due to the amount of drug that has been seized by the border patrol in recent days because according to de la Fuente, there are signs of an increase in the detection of this type of crime on “the line.”

Just on May 15, a 29-year-old driver was detained at a commercial facility in Otay-Mesa, after border agency police found 120 packages combined with other medical supplies, which had a monetary value of 5.5 million dollars. Dollars.

Previously, last Wednesday thousands of residents who were heading to the United States had to remain on hold for more than 7 hours due to the start of re-filing works at the Otay gate, in Tijuana, Baja California; and although authorities had indicated that the works would only be carried out at night to avoid affecting the daily mobility of the road, the truth is that chaos has really been generated in the mentioned area.