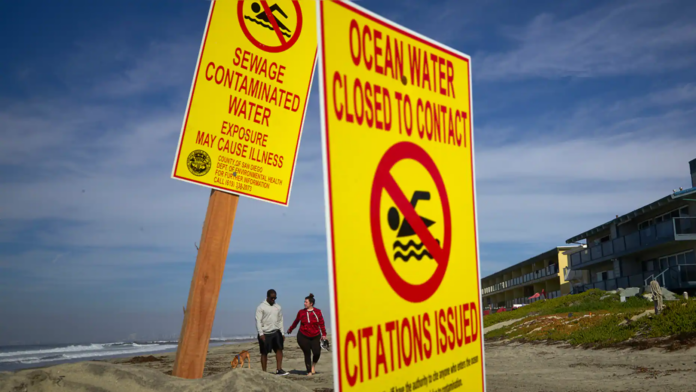 The entire shoreline of a Southern California beach was closed Friday due to sewage-contaminated runoff flowing north from Mexico’s Tijuana River.

The closure of Imperial Beach, located in San Diego County, is said to be in place until testing shows the water is safe, according to reports.

“The stench was crazy, just terrible,” said Imperial Beach Mayor Serge Dedina, according to the San Diego Union-Tribune. “We’re just going into our round-robin of endless openings and closures because of the residual sewage in the river.”

Border Patrol agents have complained and reported health-related injuries they blamed on working in the toxic sewer sludge, reports said. Lifeguards in the area have continued to work despite the water conditions.

“A lifeguard got really sick from making rescues,” Dedina said. “One had to do CPR on someone who was in polluted waters.”

The closure comes roughly a week after repairs were completed to a broken water pump in the Tijuana River, Baja officials said, according to the paper.

The broken pump had allowed tens of millions of gallons of sewage-tainted water to escape in March.

The sewage has flowed for decades and was exacerbated by recent storms over the San Diego and Tijuana regions. Millions of gallons of toxic water — a lot of which is sourced from the Tijuana River — have polluting air and water and resulted in beaches shuttering as far as Coronado.

In February, the U.S. Environmental Protection Agency said it would spend roughly $300 million to address the problem. A major project would upgrade the collection system that diverts flows to a wastewater treatment plant. San Diego officials have been pushing for a new system since 2019.

The EPA is also looking to expand concrete basins in the river valley that capture urban runoff in canyons along the border. The facilities were upgraded in 2010, but sewage and chemical-tainted flows continue to overwhelm their capacity.

On Sunday, San Diego County health officials announced that the water contact closure for the Imperial Beach shoreline was lifted.

However, Burton said the shoreline from the international border to the south end of Seacoast Drive in Imperial Beach will remain closed “until sampling confirms the areas are also safe for water contact.” City News Service reported.