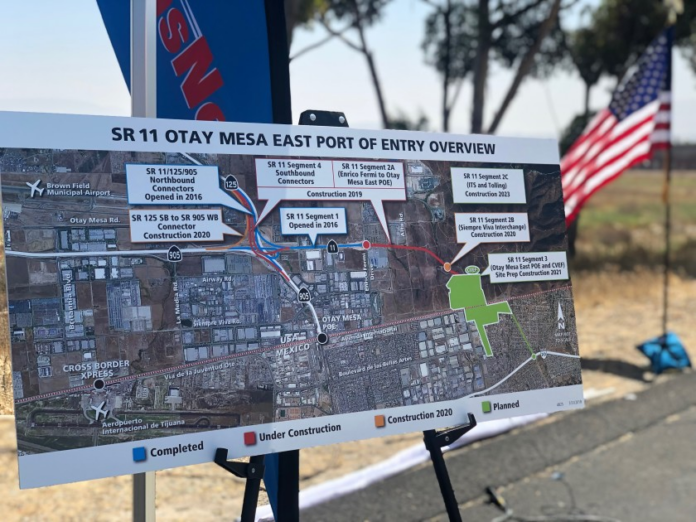 It is expected that about three miles east of the Mesa de Otay gate, the new international gate “Otay 2” will be located, between Tijuana and Otay Mesa East, which they plan to open by 2024.

The construction of said port was agreed for September 2022, between Mexico and the United States, beginning in that country in December 2019 with an investment of 565 million dollars, according to information from The San Diego Union Tribune.

For her part, Karen Postlethwaite Montijo, head of the Secretariat of Infrastructure and Urban Development of the State of Baja California, told the media that the project will cost approximately 173 million dollars.

How will it work? In the first place, the structures that stop a high voltage line through which the regions of California and Baja California share the electrical network will be replaced by concrete poles and six access lanes will be enabled that will run into the international wall, they will turn left and connect to the port of entry.

One of the advantages of this port is that, when crossing to the Mexican side, it is located near Boulevard 2000, which leads to Popotla and the south of the peninsula, also next to the junction with the toll road to Tecate, thus connecting with the rest of the country.

“Otay 2” will have 10 lanes for light vehicles and 10 for cargo transport, but the lanes will be reversible, allowing waiting times to decrease significantly compared to other international ports.

It will also be a toll port, which will be charged on the US side and based on guaranteed waiting times.

Although the cost may vary depending on the demand, it could reach between 12 and 15 dollars for light vehicles and up to 20 or 25 dollars for cargo trucks; María Rodríguez Molina, project manager with the California Department of Transportation (Caltrans), said a crossing with a 20-minute wait would be guaranteed.

“El Wachis”, operator and hitman of the Sinaloa Cartel, arrested in Ensenada

Tijuana’s Cultural Center will be illuminated for International Day against Homophobia, Transphobia, and Biphobia