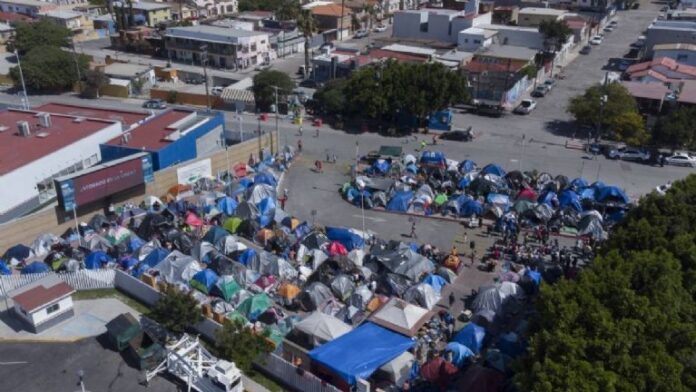 The Colegio de la Frontera Norte denounced, through a report, the deplorable conditions suffered by people waiting to cross the border into the United States.

Migrants seeking to reach the United States live in precarious conditions while they wait in the Mexican border city of Tijuana. The lack of services, including toilets, overcrowding, and lack of space are the main problems faced by people who come to the area.

The report by El Colegio de la Frontera Norte (Colef), distributed to the media this Monday, denounced the living conditions in the migrant camp that were installed almost two months ago in the El Chaparral checkpoint.

“More than 1,000 people live without sanitary services under small tarps placed on the square, the sidewalk, or the street, which are not enough to protect from a climate that has been particularly cold and rainy during this month,” the report noted.

In addition, he pointed out that “the overcrowding of shops and narrow public spaces means that at no time the healthy distance that should be maintained in this pandemic situation is respected .”

The report, entitled “Report on the conditions of stay in the Chaparral refugee camp on the Tijuana border,” lamented the absence of international organizations and state institutions for assistance.

Faced with this, the migrants “are generating self-organization processes within the camp to address problems and the need for services.” He highlighted the teaching of classes to children, a community kitchen, and self-management of security as some of these efforts.

Joe Biden, president of the United States, announced a change of course on immigration matters. It eliminated the “Stay in Mexico” program, which forced asylum seekers to wait in Mexico, often crammed into camps.

As a result of this decision, the Matamoros camp in Tamaulipas was dismantled, which concentrated 2,000 migrants. However, “it caused a similar one to quickly emerge at the same time at the other end of the border, in Tijuana, Baja California,” Colef said.

A few months ago, in mid-February, more than 300 families, mainly from Honduras, settled on the site with small tents and tents. A month later, on March 24, Roberta Jacobson, President Biden’s special assistant for southern border issues, called on migrants not to focus on El Chaparral since she said, this will not expedite the humanitarian aid application process.

That same day, Mexico and the United States agreed to seek “orderly, safe and regular migration” amid a growing flow of Central Americans, political pressure in Washington, and the Mexican claim for the Covid-19 vaccine.