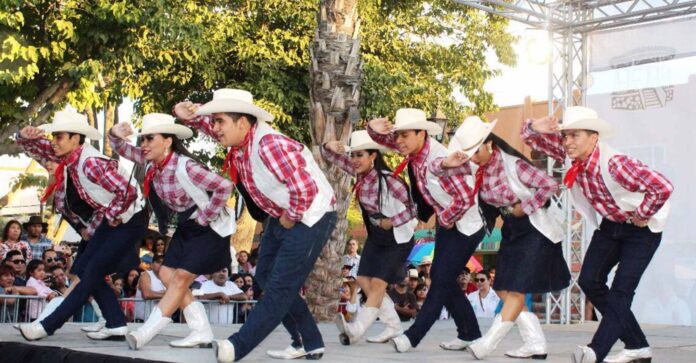 Calabaceado, a traditional dance from northwestern Mexico, has its cradle in Ensenada; it is debated whether it was born in the 1950s or earlier, at the Carnival of 1922

It is said that the Calabaceado dance took place in the town of La Misión, in the Municipality of Ensenada, and that its origins date back to the 1950s, related to livestock activities in the region.

But reviewing the program for the last day of the Ensenada carnival in 1922, I found the oldest appointment where the “stolen or Calabaceado” dance is mentioned. I quote verbatim a fraction of the text:

“Day 28… To calm the spirits, the Great Committee will order that the music bands play the Papaquis, and when this warrior hymn is heard, the panic will transform into joy, and without realizing the appearance of the subjects, they will surrender to the delights of dancing in the public thoroughfare, dancing pure pieces stolen or squashed … ”.

Lucido and well organized was the carnival of 1922. It was led by the experienced and enthusiastic María Antonieta Cota Fernández who had already participated as a candidate in 1919. Its Royal Court was made up of Álvaro Rivero as Rey Feo and the pages Refugio Ramírez and Rosalba Ibarra, among others.

JUMPS, TURNS AND KICKS
Specifically, the squash is a mixture of norteño music, cowboy dance, change of partner dance, and imitations of some activities or graces of cattle, such as jumping, turning, and kicking. The cowboys imitated these demonstrations and incorporated them into their dances.

During the dance, the change of partner is constant and there are no moments of rest for the dancers, for these reasons, it is considered a tradition that requires a lot of resistance and skill.

There are several theories about the origin of the name: in the northern region, the term “calabaceado” is a synonym of deception, as it is popularly said, “make tamales” or “put the horns”, that is, “give calabaceados ”. It is also said that this term was used by spectators when they saw the dance they said that they were “jumping like goats” and that they were “calabriando”, a word that was transformed until it was called calabaceado.

The wardrobe that men wear is, in general, jeans, a plaid denim shirt, cowboy boots, a fur vest, a leather belt with a large buckle, and a bandana around the neck. While the women repeat many of the elements but wear a skirt, blouse, and the bandana is worn in the hair.

Some of the most prominent steps are the heel tapping, the double sole stroke; the dotted step backward, also called “kick” and the whirlpool step, the latter being one of the favorites of many spectators and dancers, who lasts longer in the whirlpool step, which consists of turning the foot backward in a circular shape, turning to the right or to the left, is the one who receives the most ovations.

OTHER POSSIBLE VERSIONS
There are also versions that the pumpkin dance could have originated in the cowboy area of ​​the Sierra de Juárez and in the town of El Rosario, where cattle handling and charrería had been practiced for a long time, but no quotes have been found to support it.

In any case, its origins are located in the extensive Municipality of Ensenada, where livestock activity has been developed since the days when the first missionaries arrived.