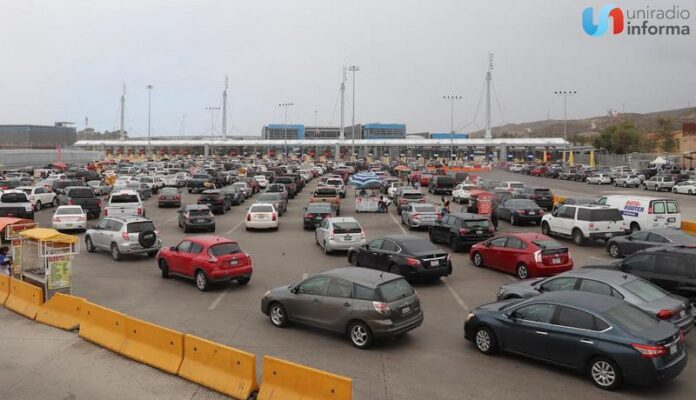 TIJUANA, BAJA CALIFORNIA.- Tijuana Customs urged last July to implement a system to control the access of “irregular” vehicles from the United States, because “mafias” continue to intern them en masse.

The foregoing is in the context of the regularization of illegal “chocolate” cars (as they call them in Mexico) promoted since 2021 by President Andrés Manuel López Obrador.

“Some 65,000 vehicles enter daily through Tijuana through its two checkpoints (50,000 through El Chaparral and 15,000 through Otay), without the possibility of inspections with Customs personnel or technological support to carry it out efficiently.

Although technology partially exists, in reality, it does not help to identify the legal situation of these vehicles and people, since they are not connected to a vehicle or criminal database,” said retired Lieutenant Colonel Fernando Martínez, Customs Administrator of Tijuana, in one of the Sedena emails hacked by Guacamaya.

“Although the decree issued by the head of the Executive Power to register the vehicles called chocolate in the national territory will bring benefits to a specific sector of the citizenry and will allow the control of those who register, it is not a hundred percent solution to the problem, since the key to the entrance to our country must literally be closed. The chocolate vehicles continue to enter supported by what the same law allows them: to be driven by an American resident.

Martínez highlighted that 90 percent of those cars are used to commit some kind of crime they are practically disposable; In Baja California alone, around 800,000 of them circulate.

The current Administration began to regularize chocolate cars in October 2021, with a charge of 2,500 pesos through a presidential decree.

Between March and September, the Secretariat of Public and Citizen Security (SSPC) presumed to have regularized 557 thousand vehicles in 13 states, 124 thousand of them in BC, with a collection of more than 1.3 billion pesos (60.5 USD), which are supposedly destined to the maintenance of the streets in Tijuana.