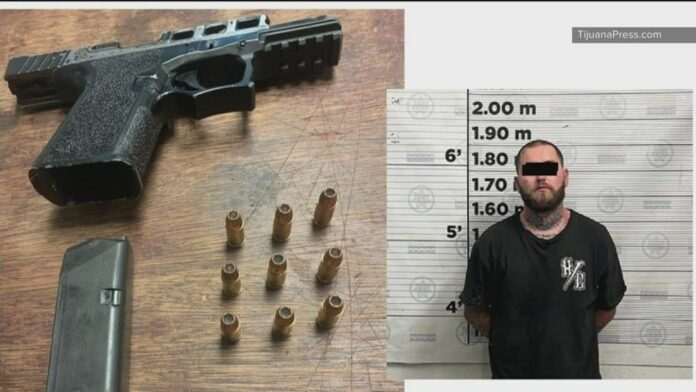 TIJUANA, Baja California — A motorcycle stunt rider from Sacramento has been released from a Tijuana prison after spending 35 days behind bars.

CJ Barham has more than 50,000 followers on Instagram, where Barham posts videos showing stunts during shows and on the road.

In August, he was charged with evading arrest and possession of a handgun in Mexico.

The stunt rider’s father said he ended up paying a large sum of money as part of a deal to get his son released.

“I’m so happy,” Barham said as he hugged his father.

Barham, 29, was thrown in jail after getting into a police chase in Rosarito Beach, while riding his custom Harley Davidson motorcycle.

He claimed officers arrested and beat him, and then planted a handgun with his belongings.

“I’ve never owned a gun and never had a gun,” said Barham.

Barham was attending a motorcycle rally in Mexico, he said, when police tried to pull him over.

“At that point, they see two Americans on nice bikes.  They’re thinking money right off the bat.  And at that point, we were already in a police chase.  They ended up saying we ran a stop sign. That’s why they were chasing us,” Barham said.

He spent seven days in jail and a month in La Mesa prison in Tijuana.

“I ended up in the Mexican population.  I ended up with some really good guys in my cell that took care of me.  And I just got very lucky,” Barham said.

Within days of Barham’s arrest, his father crossed the border, found an attorney, and worked out a deal to pay $25,000 for his son’s release, according to family members.  As part of the deal, Barham would have to plead guilty to the firearm charge and serve 30 days in custody.

“I don’t know how to tell you how the system works down there.  But all I can say is money talks.  And basically, we had some type of deal,” Barham said.

On Saturday at 1 a.m., Barham walked out of prison into his father’s arms.

“I just hugged him, cried a little bit, and he teared up.  I said let’s get the hell out of here.  And we just got straight to the border as fast as we could,” he said.

They crossed the border into San Diego just in time for a motorcycle stunt show Barham had previously scheduled at a custom motorcycle shop on Pacific Highway.

Barham was placed on probation in Mexico for the next two years. He said he has no plans to cross the border again.

As for the future, Barham is loading up his truck and hitting the road.  He has motorcycle stunt performances scheduled in October in Indianapolis and Las Vegas.