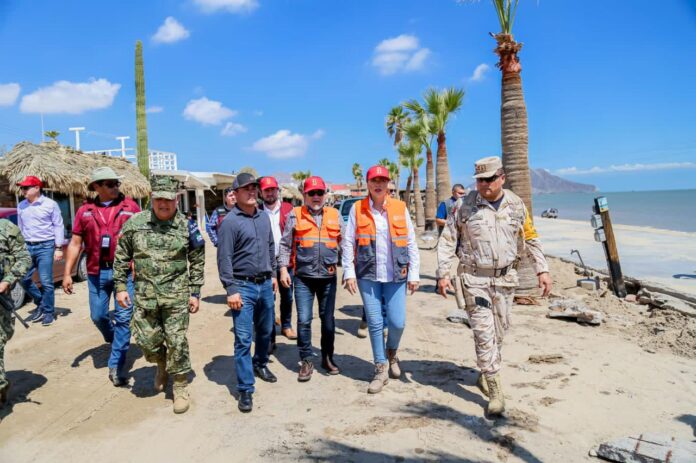 The communications of the port of San Felipe have been left without working due to the heavy rains that occurred in that municipality, which caused calls to be made and not even the Internet connection by a major telephone company.

The Municipal Civil Protection Unit of Mexicali reported that the Telnor company reported that its optical fiber was affected at the height of the highway to San Felipe, in Chinaro.

This has affected around 4,000 users in that demarcation.

René Rosado, head of the Municipal Civil Protection Unit of Mexicali, said that it is known that in San Felipe there was 85 millimeters of water accumulation in that demarcation.

They will seek to issue a declaration of emergency due to a natural disaster to receive support in the face of the passage of tropical storm Kay in the port.

After a meeting of the Municipal Foundational Council of San Felipe, they announced that they will seek to issue a declaration of emergency due to a natural disaster to the state executive to receive support in the face of the passage of tropical storm Kay in the port.

It will be tomorrow when the Municipal Council meets with the State Civil Protection Council to evaluate the declaration, so far a white balance has been recorded, as announced by the President of the San Felipe Foundation Municipal Council, José Luis Danigno .

During the passage of the natural phenomenon, 140 houses were recorded with collateral damage, more than 20 fallen posts, more than 10 fallen trees, a collapse in Mar Caribe street, in some areas the pipes broke, fallen fences and vehicles stalled by the high water level, in the area of ​​the boardwalk the waves of the sea managed to exceed the perimeter fence.

For its part, the Secretary of the Navy of the port announced that the concrete was damaged in 3 of the 4 ramps used by fishermen to introduce their boats into the sea, one of them urgently needs to be repaired to affect the start of fishing. of the shrimp on September 25, in addition, the Navy lost the rescue search dock, which is essential in an emergency situation for the fishermen.

Damage was also reported at the port’s airport due to the fact that 400 meters of the perimeter fence were knocked down by a large stream, putting the safety of the aircraft at risk.

The southern part of the municipality also registered major effects, the Santa Catarina stream remained with a large bed, as well as two others on the San Felipe-Puertecitos highway, specifically at kilometers 1 and 14.

During the passage of the storm there were shelters in four areas of the municipality of San Felipe, around 9:30 p.m. on Thursday, September 8, the rains and strong winds began, intensifying after 1 a.m. on Friday, by 6 in the morning the radio and satellite network went down.

After the chaos, on Saturday the rehabilitation and cleaning days began by the Sedena, the Navy and the National Guard, they also hope that the business and tourism sector will join in the recovery of the port.

So far, it has been established that tomorrow classes will continue as normal in the urban area of ​​San Felipe, while in the rural areas of the municipality the conditions of the schools will be evaluated.

‘We are going to continue permanently with the cleaning and reconstruction work, the objective was achieved, to safeguard the San Felipe families, we also know the needs of the fishing sector, we will be evaluating the entire municipality from the northern tourist area to the San Luis Bay Gonzaga, so we hope to return to normality soon,’ Danigno concluded.