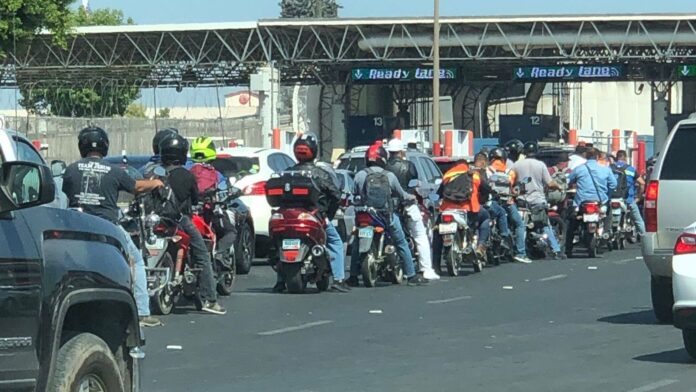 Motorcyclists will not have an exclusive way of crossing to the United States.

The possibility of an exclusive lane for motorcyclists at the Tijuana-San Diego border crossings has been rumored for several months now, even after Customs and Border Protection (CBP) denied such action, the implementation of this method for a few days at the crossing points gave a little light of hope for users, however, CBP has given information to San Diego Red about this event.

During the fall season, it was when it was decided to implement this strategy at the Otay Mesa port of entry in order to decongest the traffic generated by lines of motorcyclists, however, CBP assures that this only happened for a few days and that there are no plans to dedicate dedicated lanes for motorcycle traffic at California POEs.

CBP officers experimented with directing motorcycles to use a lane during morning rush hour to decrease congestion of motorcycle traffic mixing with lines of cars…this only lasted a few days and CBP did not institute any new policy regarding how motorcycles cross at border crossings, they commented.

It should be noted that the discontent of different users is that motorcyclists pass between the lanes in order to shorten both the distance and the waiting time to cross into the United States, this action annoys other people who also want to enter the neighboring country and queue correctly. With this clarification by CBP, said motorcyclists must respect the lines either between cars or with other motorcyclists, they added that drivers must always abide by the instructions shared by officers when crossing into the US.

For The Latest Mexico News About Living, Working, Investing, or Retiring in Mexico Please Join and Share our Page Click Here