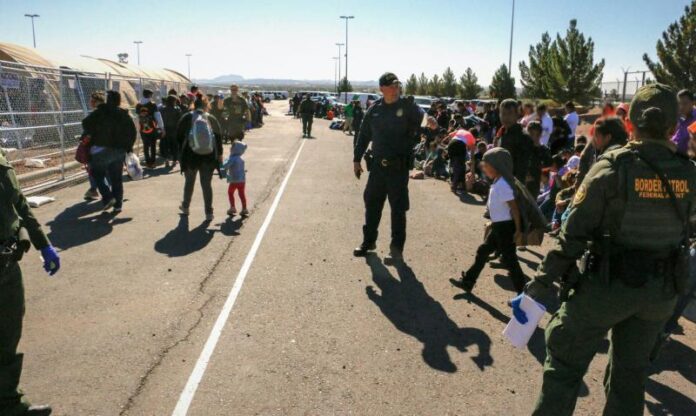 The border patrol in San Diego reported that with support from the Mexican government, it detained 711 migrants from Brazil, Venezuela, and Portugal between October 23 and November 9.

“We appreciate your support and we will continue our joint effort to bring these criminals to justice,” he reiterated.

The San Diego border patrol reported that it has a “Foreign Operations division that maintains a recurring and ongoing relationship with the Mexican government to address cross-border challenges.”

That division has agents permanently assigned, the patrol reported, to help conduct operations based on emerging trends and threats in our border region.

At the same time, the patrol reported on several “unusually large” groups of migrants that it detained based on that Mexican collaboration.

He indicated that “over the past few weeks, San Diego Sector Border Patrol agents encountered a growing number of migrant groups of unusual size ranging from approximately 50 to 90 people .”

On November 4, the patrol “in collaboration with the government of Mexico, carried out the operation, which resulted in the arrest of two Mexican citizens for human trafficking, the seizure of a truck with a box, and the rescue of 75 people from Brazil. , Venezuela and Portugal that were locked inside the truck ”.

Between October 28 and November 9, the agents encountered five groups, the majority from Brazil and Venezuela. All groups entered the United States and were made up of men, women, and children in groups of 43, 49, 73, 84, and 93 people.

Earlier, on October 27, the patrol detained a group of 67 men, women, and children from Brazil and Venezuela who were crossing into the United States through a sewer pipe.

On October 26 they found two groups, one with 86 Brazilians. A few hours later, the second group, made up of 69 Brazilians, was found in the same place. Both groups were made up of men, women, and children.

On October 23, agents observed a group of migrants entering the United States illegally through a drainage pipe three miles west of the San Ysidro port of entry. Agents responded to the area and encountered 72 men, women, and children. All the people in the group were determined to be from Brazil or Venezuela.

The patrol did not specify what the aid from the Mexican government specifically consisted of and did not immediately respond to the press.