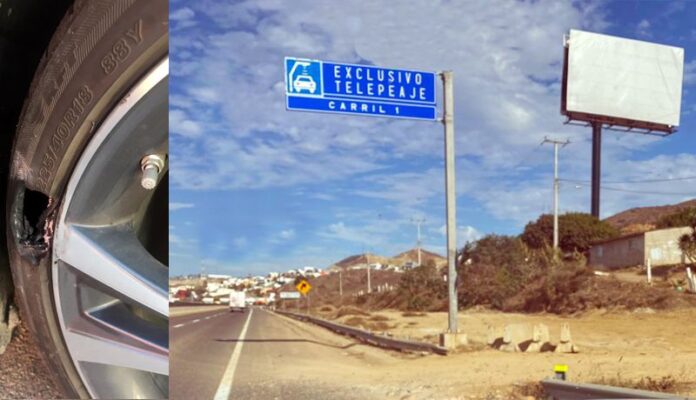 – Neighbors of Playas denounce that they put stones and spiked wires on the stage to puncture the tires of those who travel at dawn so that they stop and thus assault them with violence.

– They have detected that these violent assaults on the stage occur mainly in points such as one in front of the Convention Center and another between Baja Malibu, San Antonio del Mar, and Real del Mar.

– The residents of the area who have been victims of these events have not been denounced because they want to avoid the long lines that are made, but they will seek to do so electronically with an application (App) that the Central Prosecutor made known to them in a meeting.

– They arbitrarily opened accesses to dirt roads that would be being used as an escape route for these criminal gangs.

TIJUANA.- Mónica Jiménez, a member of the Coastal Zone Citizen Security Committee, denounces that the assaults on the Tijuana-Rosarito scenic federal highway, such as those that happened recently, are not a new matter, and that every year there is a season in which they happen.

Neighbors from Playas have been denouncing for days through social networks that they put stones and spiked wires on the stage to puncture the tires of those who travel at dawn to stop and thus assault them with violence and at gunpoint.

The activist, also a leader of the movement “No to the collection of residents in the Playas de Tijuana toll booth” refers that they have detected at least three places where this type of armed robbery is committed on that stretch of highway.

The new wave of assaults that have been reported since last weekend are the first of this year but, Jiménez explains, it is not the first time that has happened, since these criminal acts have already happened in previous years.

The also resident of the Playas de Tijuana delegation confirmed by delving that there are sections of the federal highway in which there is no lighting and there is no surveillance.

He explained that they have detected that these assaults with violence on the stage occur mainly in points such as one in front of the Convention Center and another between Baja Malibu, San Antonio del Mar, and Real del Mar.

He assures that because most crimes are committed at dawn, since the assaults are massive since it is a remote area, the authorities, when they manage to make a call for help, simply does not arrive.

He made a call to the authority to provide the public security that an area with more than 19 subdivisions and about 15 thousand inhabitants deserves.

Mónica Jiménez confirmed that the residents of the area who have been victims of these events have not denounced because they want to avoid the long lines that are made, but will seek to do it electronically with an application (App) that the Central Prosecutor made known to them in a meeting.

He commented that they made requests for checkpoints, greater surveillance elements, an increase in early morning patrols, and the presence of elements of the National Guard 24 hours a day, among others, in addition to that in a month they will have another meeting to follow up on the issue.

Finally, they reported that they arbitrarily opened accesses to dirt roads that they had said were supposed to be neighborhood roads, but that they should not be open to the scenic and that with regard to criminal acts, they are the ones that would be being used as a route of escape for these criminal gangs.

Neighbors in the area confirmed that on different occasions, the authority has placed retaining walls to block these accesses and the resulting damages, however, they are constantly removed as shown in the photographs.

Affected neighbors give their testimonies on social networks

Neighbors affected by these criminal gangs have shared some photos and experiences on social networks such as the following:

“Friends and Family, who travel the toll road, today 4:30 in the morning I was going to my work and in the height of Baja Malibu they were placed in the form of a stone barrier on the road, be very careful since the same personnel from the National Guard commented that it is a trap to rob. This is how the tire of my car was ”.

“Again cheating on stage. It passed today at 4:30 am in front of Baja Malibu in the scenic Tijuana direction exactly past the Yazmin store. 2 cars were affected. And there were the stones on both sides of the road. The good thing is that they failed to assault.

The bad thing is that there are only a few units 6 to 8 of the National Guard for 250km of highway. The officer told me if an emergency happens to call the National Highway Guard headquarters directly. Calling 9-11 is longer for federal highway ”.

The proposals for actions to improve the security of the Coastal Zone that they raised are:

1. Establish an operational plan to improve the security of the area that includes:

National Guard.- Permanent preventive patrolling in the section of the highway that runs from the Playas de Tijuana booth to Playas de Rosarito.- Install preventive filters in the south to north and north to south accesses on the highway, prioritizing the hours of highest crime incidence.- Intervene in all vehicles that circulate with expired license plates, without license plates or commit traffic offenses.

Municipal police– Decentralize the San Antonio del Mar booth from the Playas de Tijuana District, assigning the staff directly to the sector with a Supervisor in charge (it is suggested to appoint a service there).- The state of force must be 4 elements per turn with two units.- The San Antonio del Mar booth must have 24-hour coverage and the element must be armed.- Collaborate with the National Guard in surveillance tours of the highway.- Make tours permanently in each of the subdivisions in the area.- Verify that the signing points of each of the subdivisions are working.- Coordinate with the Municipal Police of Playas de Rosarito and the National Guard so that preventive tours are carried out on the Rancho del Mar bridge.- Carry out preventive tours through the gaps in the area.

Install emergency buttons in the security booths of the subdivisions, this with an investment on the part of the neighbors.- Establish WhatsApp groups with all the committees in the area.

Neighbors-Install video surveillance cameras at strategic points in the area and with the support of the Municipal Police connect them to the C2 Center.

State Guard– Carry out preventive tours in the area of ​​the gaps and in the area in general.- Collaboration with intelligence information you may have on incidents with other authorities.

InvestigationNeighbors– In the event that you are a victim of a crime, you will report immediately to the 9-1-1 emergency number and file the complaint with the Public Ministry.

Prosecutor’s office-It will carry out the investigation of each one of the crimes that are reported and will inform the victim and the Neighborhood Committee of the follow-up and the final result of the investigation.-They will lead actions to dismantle the criminal groups that operate in the area.

Delegation– Analyze the possibility of blocking access to the area from gaps.

Objectives of these actions:– Eliminate violent crime on the highway.- Reduce crime in the area.- Reduce the response times of corporations to crimes and emergencies.- Process and obtain convictions of the criminals who are committing these crimes.- Improve the perception of safety of the residents of the area.