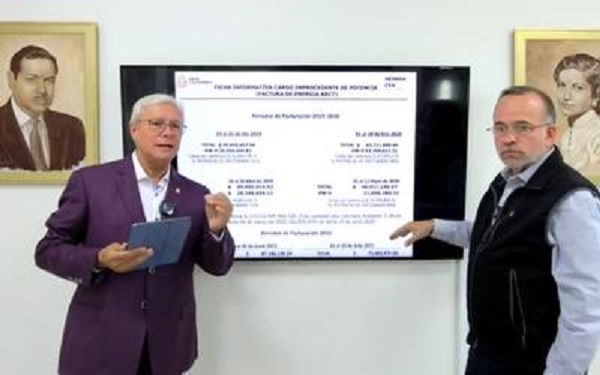 Jamie Bonilla assured that he will seek to solve this problem in less than the month that he has left in office.

Jaime Bonilla, governor of Baja California, maintained his position of not paying 163.1 million pesos to the Federal Electricity Commission (CFE).

It was through a video on his social networks that the president reiterated his refusal to pay.

“We are not just going to pay money that we do not owe, at least that is the position of the state and here in this state, everyone pays. As long as the state-owned company does not return 166 million pesos, it owes the state for overcharging in the supply of electricity to the Río Colorado-Tijuana Aqueduct.

In addition, he assured that he will seek to solve this problem in less than the month that he has left in office

“If it would be our fault not to have tried to solve the problem, it would be irresponsible on our part to ignore, knowing that we are overcharging, leave this problem to the future administration.”

Regarding the change of supplier, he revealed that there is an agreement with the company E3, which is in consortium with Next Energy, a firm to which the installation and operation of the Baja California photovoltaic plant were granted.

“But Cenace (National Center for Energy Control) and CFE stop the change of supplier.”

For his part, Salomón Faz, secretary for the Management, Sanitation, and Protection of Water (Seproa) pointed out that the CFE has “collected 166 million pesos more” and explained that the parastatal has made collections by applying the power factor, which should only be valid during the summer months.

The secretary also indicated that clarification has been requested, as well as the intervention of the Energy Regulatory Commission (CRE), a body that issued a report asking the CFE to collect the rate as established and make the adjustment, which has not happened.

This Thursday, September 30th, the Federal Electricity Commission suspended the supply of electricity to the State Water Commission (CEA), due to non-compliance in the payment of 163 million 193 thousand 181 pesos, corresponding to the collection of August 1 to date.

The suspension of the service directly affects the operation of the Río Colorado-Tijuana Aqueduct, which stopped sending water from Mexicali to Tijuana.