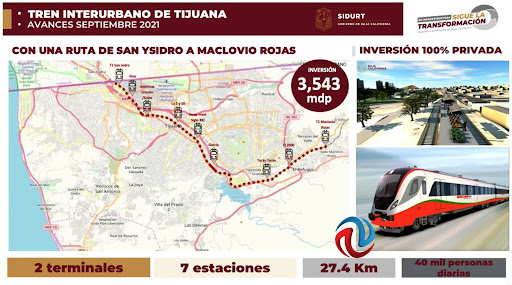 During the daily report shared by the Government of Baja California, Architect Karen Postlethwaite Montijo, Secretary of Infrastructure, Development and Territorial Planning, announced the progress of this Interurban Tijuana Train.

After many studies, it was found that Tijuana, despite being one of the largest cities, does not have a massive and efficient public transport service for citizens, so the train tracks will be used that range from the Maclovio Rojas neighborhood to the San Ysidro borderline.

This train will transport up to 40 thousand people a day, being a watershed in the history of our region by having a transport system of this type and level for the first time.

In order for these routes to be adapted to the use of the public, 2 terminals, 7 intermediate stations will be added on this route, in addition to changing these so that they are in optimal condition for use in other types of transport that are not just freight trains that they happen a few times a day. For this, 3,543 million pesos will be invested.

If they pass more than 200 current public transport routes, with the operation of this train they will be restored to generate an order and thus pass to 22 ordered routes that will work together with the Interurban Train route.