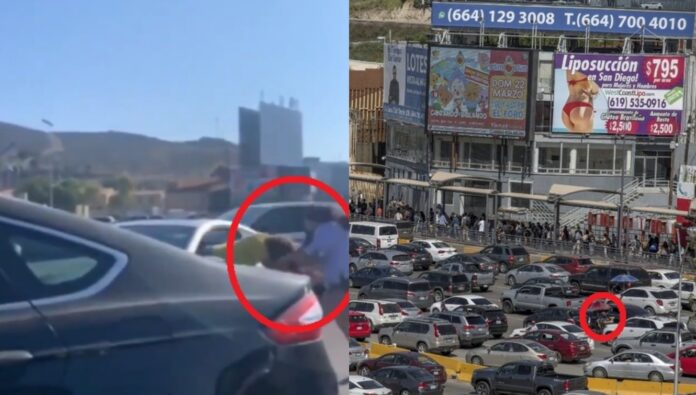 Apparently, the incident occurred in the heat of the long lines to enter the United States through the state of Baja California

Tijuana. – Dozens of videos went viral on social networks, after the surprising thing about the fight starring where two women are observed who give it all and star in a strong fight while they waited in the long lines at the Tijuana gatehouse, in the state of Baja California.

Although it is not the first time that an event of this type has been recorded on video, the women surprised Internet users by the aggressive way in which one of them approaches her to hit her while she is inside her car, where She was accompanied by a man.

The video has been released on various sites and social media pages, and although it is not reported in which of the Tijuana booths it happened (San Ysidro, Otay), it is known that the lawsuit had to do with one of the drivers He tried to get into the line of cars and collided with one of the waiting vehicles.

In the video, which was recorded from another of the cars waiting in line, you can see a woman who hits the driver of a silver car, while they struggle, the woman dressed in white grabs the other’s hair. until he manages to get it out the window.

The fight between the women continues, until a man dressed in black is seen getting out of the back of the silver car, who tries to stop the upset woman in a white shirt, who does not stop complaining about the damage to her car, which appears to be a black vehicle seen in the background.

“Look how you left my car!”, The woman shouts, while also hitting the young man dressed in black. But first, you can also see the driver giving a tremendous kick to the woman in white.

Everything happens while a man in a safety vest walks from one side to the other, finally approaching the three people and closely observing the situation.

Finally, the woman in white asks the man to pay for the damage to her car, however, the young man can be heard responding that he does not have cash, so the woman returns annoyed towards her car, at which point the video ends, which has already been reproduced thousands of times on social networks.