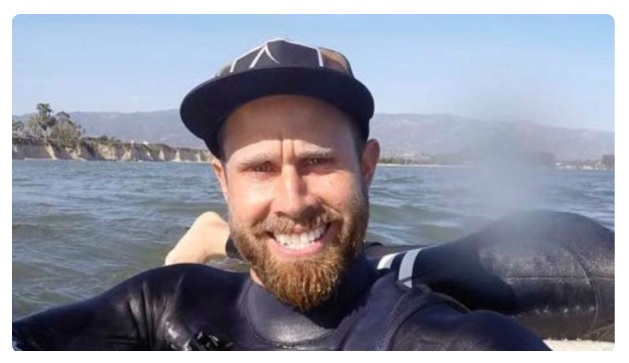 The owner of a Southern California surf school has been arrested for allegedly stabbing and killing his two kids—aged 1 and 3—after taking them over the border to Mexico without telling his wife where he was going.

Matthew Taylor Coleman, 40, was detained Tuesday when he attempted to re-enter the United States one day after the bodies of his children were found at a ranch near Rosarito in Baja California.

Coleman and his wife, Abby, run the popular Lovewater Surf School in Santa Barbara. Sanchez said that concerns about Coleman’s whereabouts were raised over the weekend when Abby Coleman reported to Santa Barbara police that her husband and their two children missing.

Mexican authorities said they have video footage showing Coleman and the children checking into a Rosarito hotel on Saturday. The footage is then said to show the three leaving in the early hours of Monday, before Coleman returns alone that morning to check out.

In the time between Coleman’s appearances on the footage, a farm worker discovered the mutilated bodies of the two infants. U.S. Customs and Border Protection agents were waiting for Coleman when he tried to re-enter the country at the San Ysidro checkpoint on Tuesday, and he’s now in federal custody after being arrested on suspicion of murder.

ABC7 reports that Mexican and U.S. authorities are working together to return the children’s bodies to their California home. Coleman is reportedly expected to face charges of aggravated murder in Mexico.

The FBI said in a statement: “A joint investigation is underway among the Santa Barbara Police Department, the FBI in Los Angeles and San Diego, U.S. Customs and Border Protection and Mexican authorities.”

Lovewater Surf School’s website shows several photos of the Coleman family together. In Coleman’s biography, it states that he taught high school for several years before founding the surf school.

The surf instructor posted about this Christian faith online, wondering in a November 2020 Facebook post whether “there is a type of Great American Renaissance following the years of Covid, censorship, and political divisiveness… that will empower each person’s heart to come alive and explode with innovative ideas, new business models, new music sounds and never seen ways to build an amazing community?”

Just a month earlier, Coleman had celebrated the birth of the couple’s youngest child, Roxy Rain, in an Instagram post.

“While waiting for her to come, I kept feeling this sense that she was going to be born at a very pivotal time in history and that she would represent a dawn, or even awakening, to years of great blessing for our family and nation,” he wrote. “Another picture that came to me was of God reaching down into a river bed and picking up a small stone (rock), examining it intently. Just as David had done before slaying Goliath, God examined the stone and was confident that it was just the perfect one for the battle. Although it was small, smooth and somewhat harmless looking, he knew that it would become great when placed into the palm of a skilled hand. My declaration over Roxy Rain is that she has been hand picked by God to slay the giants in the land.”