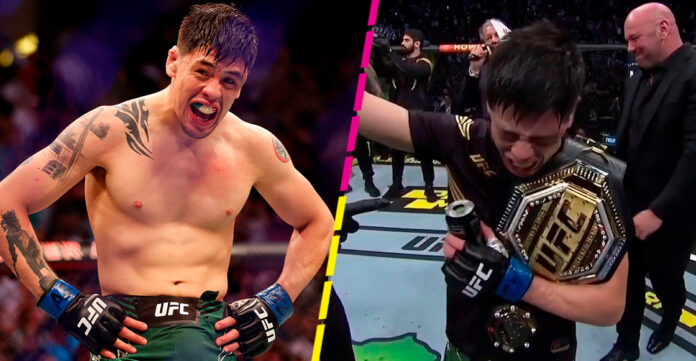 Tijuana’s Brandon Moreno became the first Mexican to be a champion in the UFC.

The UFC chronicler’s English words echoed and continue to echo: “Tijuana, you have a champion!”. What had just happened in the Octagon had never been presented in the sport of mixed martial arts: a man born in Mexico had won the highest championship.

Brandon Moreno, 27, from the Tijuana border, did it by subduing defending champion Deiveson Figueiredo of Brazil in the third round. Thus, he snatched the UFC flyweight title that the Mexican gladiator caressed last December when the result between them was a tie in an incredible battle.

Mexico has been the birthplace of hundreds of world boxing champions, and now has its first in the so-called “MMA.”

Although sports experts anticipated that Moreno had a good chance of winning the belt, the reality is that the victory was shocking. The crowded sand in Glendale, Arizona, erupted when the Amazon was unable to continue.

Then, when the dream moment of receiving the belt came true, Moreno (19-5-2) was lifted up high by the man he had defeated himself, a giant detail of Figueiredo. The new flyweight king snapped with excitement.

Speaking in Spanish, Brandon took out everything he had on his chest: “We live in a country where sometimes we use the ‘Yes you can, yes you can’, and sometimes we can’t. But you could bastard! Today it was possible, dude! ”.

While Caín Velásquez did remarkable things as the first man of Mexican blood to be a heavyweight champion around a decade ago, what Moreno did on June 12, 2021, will go down in history.