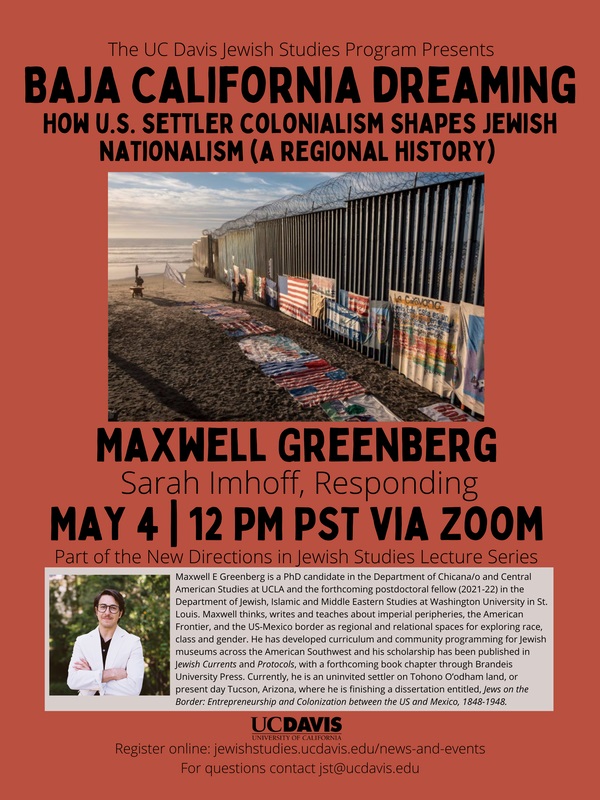 In the academic world, sometimes controversial issues arise that are to draw attention, especially the one that I have raised on several occasions, about the pressures that Mexican sovereignty has received to alienate the Baja California peninsula, by force, by negotiation or for an acquisition.

My critics, as always, go to the disqualification but stop in their tracks before the grounds that I have shared with them about that persistent intention and that suddenly, flashes appear in the environment that bring it up again, as happened just on the 4th of Last May at the headquarters of the University of California at Davis, where the historical topic entitled: “The Baja California Dream: How US Colonialism Shapes Jewish Nationalism” was unleashed in debate.

The keynote speaker was Maxwell Greenberg, Ph.D. candidate at UCLA, and the “interviewee” was Sarah Imhoff, professor at UC-Davis.

It is striking that the argument to be discussed has been Jewish nationalism that has had a resurgence today, with Orthodox groups that come out to demonstrate in the streets of Israel, against inter-religious marriage. They condemn Israelis marrying members of different religions. In the same way, it highlights that this forum would otherwise have gone unnoticed like many of the activities of the academy, but it receives a wide space of criticism in the newspaper “The Jerusalem Post”.

But well, the university meeting dealt with the issue of the mass expulsion of Jews from Russia, after the assassination of Tsar Alexander II in 1881 attributed to a member of that community in the city of Saint Petersburg. From there the main emigrations to America left for the United States and Argentina.

They were the famous Russian “pogroms” that greatly disturbed the influential Israeli community based in San Francisco, who through the controversial group called B’nai B’rith, proposed the formation of the company International Society for the Colonization of Russian Jews in 1891.

And the offer was launched to acquire 2 million acres of the coveted Baja California peninsula and settle there Russian Jewish families who suffered persecution, as well as others in the same situation in Eastern Europe.

The proposal to the Mexican government was that it cede the lands of the peninsula in a concession very similar to the one that Benito Juárez allowed the American real estate businessman Jacobo P. Leese in 1864.

It was practically installing Palestine in the Pacific through this ambitious program, where the Jewish settlers would establish farms, and with the product they would pay the contract to the San Francisco company, which would make the main payment to the Mexican authorities.

This short-lived colonization project was so mentioned that interest persisted until the middle of the last century, especially in the environment of great turmoil prior to World War II where the media entrepreneur also based in San Francisco, William Randolph Hearst, revived it, when in addition to Baja California he also proposed Angola and Madagascar in Africa or the Guyanas in the Caribbean.

At the University of California at Davis, the exponent Maxwell Greenberg puts forward the thesis that Zionism and some Israeli nationalism attitudes could have encouraged emigration of white settlers to new lands, which in the case of Baja California disturbed predominantly Catholic Mexicans. that may have come into conflict. Behind all this, the theory of “Manifest Destiny” is always present.

Greenberg concluded his remarks by stating that we should focus on the Baja California plan today because “it is a model for studying Jewish nationalism elsewhere, such as Zionism, to show what this story tells us about Zionism and its political influences, and on how the construction of the Jewish nation in Palestine was not only part of European colonialism but also entangled with US imperialism. “

This colonization plan, of course, today is extinct and is unfeasible.

Do not overlook that the criticism of the newspaper The Jerusalem Post, is due to the position of the Jewish Studies section of the University of Davis to bring this historical issue to discussion today, when there were 70 other academic proposals seeking to appear in this interesting forum.

The release of the topic occurs, oh oh, just when today tensions are increasing in the Middle East due to the missile attack coming from the Gaza Strip, in Palestine … Coincidence? … Hmm, let’s think so, a coincidence.

UNIVERSITY OF CALIFORNIA AT DAVIS
https://networks.h-net.org/node/28655/discussions/7657154/may-4-12pdt-maxwell-greenberg-baja-california-dreaming-how-us