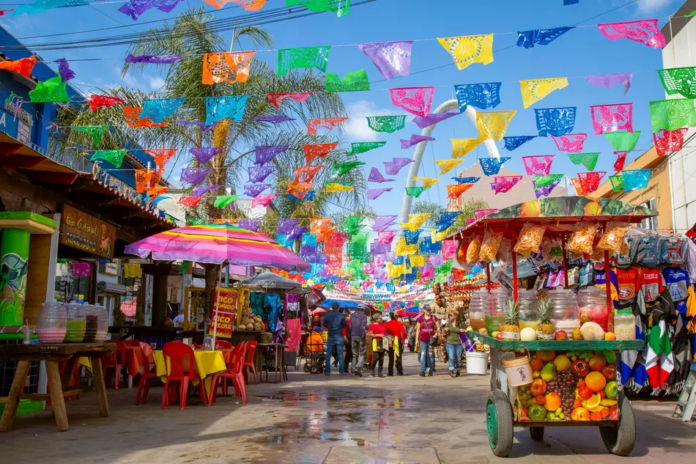 Only 16 miles stand between you and a two-nation vacation when visiting San Diego. In fact, Tijuana, the biggest city in Baja California, Mexico, is so close, that more than 100,000 people pop over the border daily to work, attend school, go to a doctor’s appointment, shop, grab a meal, or catch a soccer match, making it one of the busiest land-border crossings in the world.

In general, U.S. citizens have a fairly easy time getting into Mexico, but often experience long wait times at customs on the return trip. Usually, the fastest and easiest ways to enter Tijuana are via automobile or pedestrian bridges. Smart Border Coalition tracks real-time wait times at all ports of entry for both options as well as provides answers to many frequently asked questions.

What Is the Cheapest Way to Get From San Diego to Tijuana?

On foot. We’re not kidding. There are four pedestrian points where visitors can cross the border from San Diego County into the main Tijuana metro area: PedWest (opened in 2016 across from the Outlets At The Border), PedEast (closer to the San Ysidro Trolley stop), Otay Mesa, and the Cross Border Express (more on the latter in the flying section).

There are lots of ways to arrive at the bridges. Drive and park your own car in one of the many commercial lots surrounding the ports of entry on the US side. They can fill up at peak times. Rideshares and taxis can also drop you off near the entrances. (Uber drivers can shuttle passengers across the border into Mexico but cannot bring them back into the US.)

Lots of people opt for public transit. The San Diego Trolley, a light rail system, follows the Blue Line from downtown through the Southern communities of National City, Chula Vista, Imperial Beach and terminates near the San Ysidro crossing. You can pick it up at several downtown stops including by Petco Park and in Barrio Logan. There are some free public lots next to Trolley stations from 8th Street to Beyer Boulevard. One-way fare is $2.50 unless you qualify for the senior/disabled/Medicare rate of $1.25. One-day passes for adults start at $6. Trains are frequent from early morning to late evening, seven days a week.

What Is the Fastest Way to Get From San Diego to Tijuana?

Depending on the day and time, the answer to this question could also be taking the Trolley or driving and parking at the border and then using the footbridge walking over. But often if traffic is light on the I5, I805, I905, or SR125 freeways, one can usually zip across the border in a car in a matter of minutes. The return trip where everyone must go through customs/border patrol is the real time suck, especially if you come back on a Sunday or Monday. Being a member of a Trusted Traveler Program like Global Entry or NEXUS can significantly reduce your wait time as it makes you eligible to use the expedited Ready Lanes.&nbsp;

The two vehicle crossing points are El Chaparral (San Ysidro), the main port of entry, and Otay Mesa, which connects Otay Mesa, a San Diego suburb, with the Otay Centenario borough of Tijuana. Companies like YTS Transport offer chauffeured car shuttle services between both countries. Make sure any hired driver has the correct permits to take you across the border or to the airport.

Mexican law requires motorists to have “proof of financial responsibility” in an accident regardless of fault. The two forms of proof: either carry sufficient cash to cover damages or purchase a temporary auto policy from a Mexican insurance company. U.S. policies do not satisfy the legal requirement. Purchase online in advance or in-person just before crossing the border. Cutting corners here can lead to serious penalties. If willing to take this extra step, having your own car comes in handy to get out to the beach or parts of town outside the main tourism sector.

How Long Is the Flight?

Flying to Tijuana from San Diego is an option but not realistic or cost-effective because there are no direct flights from San Diego International Airport (SAN). Getting from there to Tijuana International Airport (TIJ) almost always includes flying far out of the way to cities like Las Vegas, Atlanta, and Guadalajara, and at least two connections, which results in a travel day almost three times as long as the time it would take you to walk from downtown to downtown. We’re talking 14 or 15 hours instead of four or five on Aeromexico, Volaris, Frontier, Delta, or likely some combination of those airlines.

However, flying in and out of TIJ for a trip that includes both cities might save you money depending on where you are flying from or if you are going to another Mexican destination. Cross Border Xpress (CBX) is a 390-foot pedestrian bridge that connects TIJ with a service terminal on the American side in Otay Mesa Travelers can rent cars, catch the shuttle, exchange currency, and eat in the food truck area at the service terminal. Only TIJ-ticketed passengers can access CBX to move between countries. Round-trip crossings are $30.

Is There a Bus That Goes From San Diego to Tijuana?

Greyhound offers regular bus service from the San Diego Bus Station in downtown (1313 National Ave.) to Tijuana Central Bus Station. The route typically takes a little more than an hour, requires a border stop, and usually costs between $13 and $25. The price depends on the day of the week, time of the day, the season, and whether you chose an economy, economy extra, or flexible class ticket. Tufesa Internacional, which is geared more to Spanish-speaking travelers, has a route from San Ysidro to Tijuana as well, but at that point you’re basically already there,

When Is The Best Time To Travel to Tijuana?

Tijuana experiences the same mostly mild Mediterranean weather as San Diego so any time of year is ripe for a visit. It’s obviously warmer from spring through fall and summer is the best time to take in the beaches between Tijuana, Rosarito Beach, and Ensenada. Spring and summer also host more cultural and food events including a jazz and blues festival, Expo Artesanal, Baja Beach Fest, and the Guadalupe Valley Festival. It’s also much less likely to rain. The Best Time to Visit Tijuana

Do I Need a Visa to Travel to Tijuana?

All U.S. citizens must present a valid passport to go back and forth from Tijuana, but do not need to secure a visa. (Permanent residents of Canada, the United Kingdom, Japan, Australia, or any country that is a member of the Schengen Area or the Pacific Alliance also don’t need entry visas unless they plan to stay longer than 180 days.) However, visitors must fill out the free Forma Migratoria Múltiple (FMM) even if it’s only a day trip. Get it at the point of entry from the Mexican border authorities. If you plan to stay in Mexico longer than seven days, you will have to purchase the 180-day FMM permit for approximately $30. If you plan to conduct business while in Tijuana, you will have to apply for a business visitor visa and comply with various other rules set by the Mexican government.

What Is There to Do in Tijuana?

Tijuana is a large, modern, cosmopolitan city with museums, fine dining, and cultural offerings that have been undergoing quite a renaissance over the last decade. Spend the day wandering down alleys tasting tacos from street carts, sipping beers from the bustling craft scene, or shopping for piñatas, silver jewelry, brightly colored arts and crafts, or cheap medicine. Avenida Revolución (Revolution Avenue), known to locals as La Revu, is the city’s main drag and is within walking distance from the pedestrian border bridges. You can buy souvenirs and pay to have your picture taken with a Zonkey, a spectacle where they paint a donkey with zebra stripes. The street has also developed lately to include art galleries, shops with luxury items like expensive denim lines and home design goods, boutique hotels, and some hip hangs like Cine Tonalá. Mercado Hidalgo, a traditional open market, is a popular stop to buy Mexican ingredients and handmade tortillas (which freeze well). Stop at Plaza Santa Cecilia, one of the oldest squares in town, to see the iconic arch and possibly hear live music. Explore the Centro Cultural Tijuana, housed in an architecturally memorable spherical building and the adjacent Museo de las Californias. Sports fans can get tickets to a Xolos soccer game or a Lucha libre match. You can also eat a Caesar salad where it was invented (yep, Tijuana in 1924) or sample dishes like ramen and sausages at the trendy Telefónica Gastro Park. If you prefer the guidance and structure of a group tour, check out options with Turista Libra or Five Star Tours.