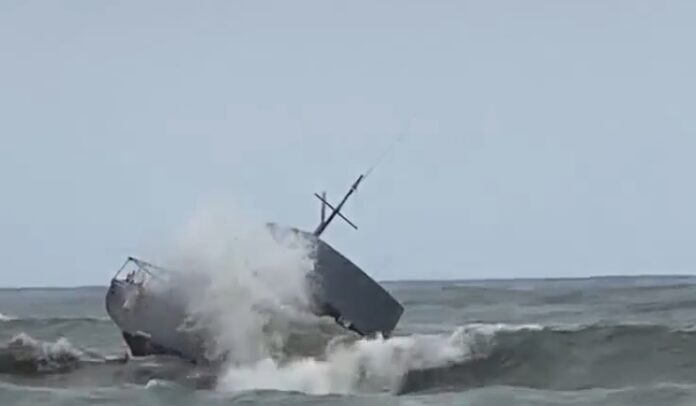 Tijuana, Baja California.- A suspected smuggling boat that broke apart in choppy waters near Point Loma Sunday may have been transporting immigrants but Robert Butler says he thinks the owner is local to San Diego.

“We see him around all the time,” Butler said.

Butler owns TowBoatUS San Diego, a tow and salvage service that works hand-in-hand with Geico Insurance. They were the first to call the U.S. Coast Guard when the 40-foot cabin cruiser capsized on the rocks near the Point Loma Tide Pools in the Cabrillo National Monument.

Butler said they were first asked to help around 8:45 a.m. Sunday by someone on a sailboat next to the boat in trouble. He said he believes the two were traveling together.

“In 30 years of doing this, this was right there as far as one of the gnarliest ones we’ve seen,” Butler said.

He said once he realized where the boat was stranded and the danger surrounding it, he suggested they call the Coast Guard.

“They were adamant that we don’t call,” Butler said. “So, we called anyway because it’s a safety thing for us.” ‘This was the one’: Local lifeguard among first to respond to deadly boat wreck.

A lifeguard who helped rescue passengers from the water said the boat had disintegrated with video showing a field of debris in the water. The Coast Guard suspended its search and response mission in the area Monday morning. Twenty-nine people were rescued and three died.

U.S. Customs and Border Protection said in a Tuesday update that all except two people onboard the boat were Mexican nationals with no legal status to enter the U.S. One person was trying to enter the U.S. from Guatemala and the captain of the boat, a U.S. citizen, was turned over to U.S. Immigration and Customs Enforcement, CBP said.

Butler said some of the casualties were put on the deck of their boat, a vessel capable of navigating kelp without getting stuck. He said the suspected smuggler is well known and anchors near North Island, an area known as “the zoo.”

“It’s basically where people anchor for free,” Butler said. “They’re known as bouncers. They know exactly how long they can stay before they have to move on to the next spot.”

Twenty-eight people were taken into Border Patrol custody for processing, including an unaccompanied 15-year-old boy.  The others were between 18-39 years old, including 21 men and 6 women.

The Coast Guard and CBP said the incident is still under investigation.

Worse than covid-19? Did Porfirio Díaz stop a black plague epidemic in Mexico?