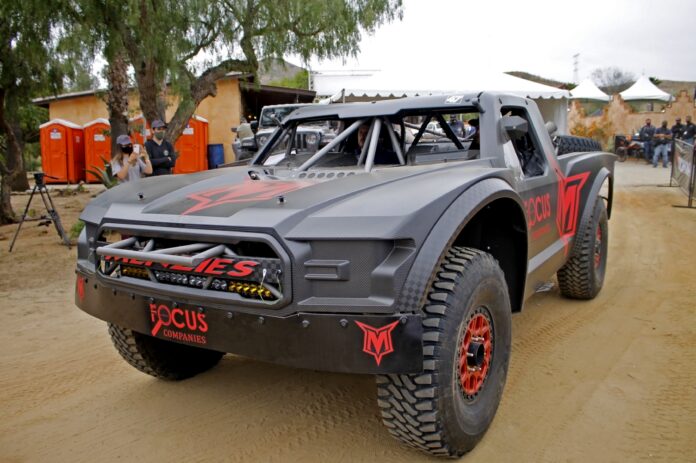 The American Bryce Menzies will be back this weekend in Baja California after winning the 34th edition of the San Felipe 250, but now to say present in the Mexican 1000 of Norra.

Menzies will be driving his Tour Truck, a Ford F-150, throughout the five days of the rally, passing through areas such as Ensenada, San Felipe and Bahía de Los Ángeles.

SECOND VEHICLE
The category in which the “Golden Boy” will say present is Prerun Trucks within the Evolution Era, where it will face rivals such as Darren Skilton, Jeremy Spirkoff and Jessalyn Sells.

As an extra, the Menzies Motorsports team will have a second vehicle at Norra, the Trophy Truck Huseman All Wheel Drive, which will be driven by Bryce’s father, Steve Menzies.

Precisely this Truck has more than a thousand horsepower and is a unique design, since there is no other model like it in the Off-Road, being requested by Steve Menzies to the Huseman family and with a cost of over a million of dollars.

The initial plan of the American family was to run this event throughout the Baja California peninsula, but with the request of the Government of Baja California Sur not to allow off-road events in their state due to the health issue of Covid- 19.

The Mexicans Willie Valdez Junior, Willie Valdez III and Pepe Rodríguez participate in this team, who have been part of the group of mechanics for several years and will give the Aztec flavor to the Trucks with the colors in blue, red and yellow of the Red brand. Bull.

Yesterday the 2021 edition of the Mexican 1000 was launched with the first day of mechanical review at the Horsepower Ranch, headquarters of the tour company Wide Open, an event that was held under strict health protocols due to Covid-19 and without allowing access for fans to the traditional off-road site.

More than 100 teams from Mexico and the United States will take part in this competition, which was not held in 2020 due to the global coronavirus pandemic, also having a change in the route on this occasion, as they were unable to travel to Baja California Sur as part of the sanitary measures in that state.

All runners, mechanics, journalists and staff underwent the Covid test, seeking to avoid risks of possible contagion and also having different health stations on the property where the mechanical contingency was carried out.

Today at 9:00 in the morning the second day of mechanical review will be carried out, again without allowing the passage of fans, with limited capacity at the Horsepower Ranch, as part of the indications made by the Baja Health Secretariat California.

From tomorrow until next Thursday, the engines will roar in areas such as the Eréndira ejido, Valle de la Trinidad, San Felipe, Puertecitos and Bahía de Los Ángeles, with modern units participating, as well as from the eighties and nineties.

FOUST WILL GIVE ITS “ELECTRIC” TOUCH
Tanner Foust, professional rally driver and driver of the Top Gear program in the United States, will be driving a new electric car from the Volkswagen company, model ID.4, a unit that will be tested in the deserts of Baja California.

Foust indicated yesterday in the mechanical review that the vehicle can reach very high speeds and that the German brand has worked for several years in the development of this car, which is a prototype for off-road and rally competitions.

MENZIES TO THE “SQUARE”
Steve Menzies and Bryce Menzies will seek to win the overall of the 2021 edition of the Mexican 1000, Norra rally that will take place between Ensenada, San Felipe and Bahía de Los Ángeles.

The father and son duo will be in control of two Trucks, with Steve driving his Trophy Truck Huseman All Wheel Drive, while Bryce will man his Tour Truck starting this Sunday.

It will be five days of competition for the Menzies, thinking of having fun within the deserts of Baja California and with a more relaxed format in relation to series such as Score International and Best In The Desert.

TOMORROW THE GREEN FLAG WILL FALL
Tomorrow the delegation of Santo Tomás will be the scene of the official start of the Mexican 1000 with the first special stage, the motorcycles starting their journey at 6:00 in the morning and the cars will leave at 9:30 in the morning.

As it is a rally, there are transit stages (where there is no speed by the participating vehicles), as well as special stages (these are on dirt roads and have race speed), pointing out Eliseo García that the route of the The first day will end at El Dorado Ranch in San Felipe, headquarters that will have restricted access as part of the health protocols for Covid-19.