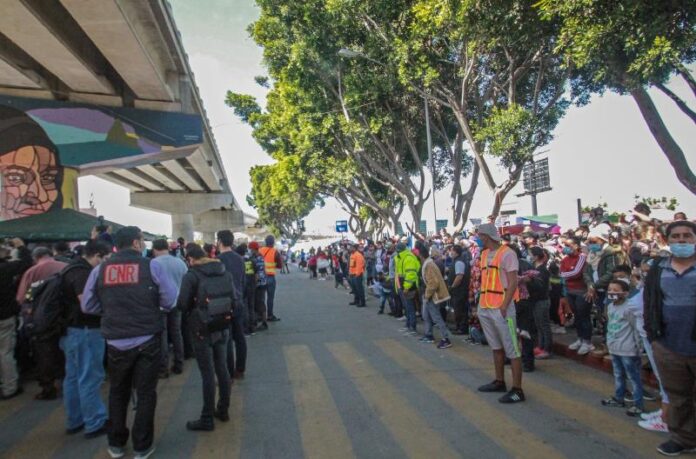 Tijuana Baja California.- Tension, despair, and uncertainty are perceived along the Mexican border due to the increase in the flow of migrants and the new policies of the US government of Joe Biden, who on Wednesday denied that there is a “migration crisis”.

In Tijuana, the largest city on Mexico’s northern border, confusion reigns in a camp with 1,500 migrants from Honduras, El Salvador, Cuba, Haiti, and Africa, among whom are 300 children, 50 babies, and 10 pregnant women waiting to cross to the united states.

The migrants denounced that they are in camping houses without toilets or spaces for personal hygiene, with little surveillance from the Tijuana Municipal Police.

“We are not going to go to a shelter until they give us an answer,” said asylum seekers from the El Chaparral camp, who preferred to remain anonymous for fear of their safety.

Biden resumed on February 19 the processing of 25,000 asylum seekers returned to Mexico under the Migrant Protection Protocol (MPP), known as “Remain in Mexico”, established by former President Donald Trump (2017-2021).

Although these migrants do not qualify within the MPP, they argued that the media “spread” that Biden would “open the doors” and that returning to their countries of origin is not an option.

“It is cruel because most of us here come for persecution, we come for acts of torture or for some other reason, but we are here to send a message to the authorities that we do not want to enter by force,” said a woman from Honduras.

THE ROLE OF MEXICO

José Luis Pérez, municipal director of Attention to Migrants, requested the intervention of the Government of Mexican President Andrés Manuel López Obrador by ensuring that he does not perceive a federal presence.

Unlike in May 2019, when Trump pressured the Government of Mexico to stop the migratory flow with the Armed Forces, now there is no public position.

The Government of Mexico has more than 7,770 agents of the National Guard, a military police force, deployed in the four southern border states, of which 3,484 are in Chiapas.

“At the moment no further deployment is contemplated on the southern border,” a spokeswoman for the National Guard told Efe in response to reports of an alleged increase in their presence due to the growing migratory flow.

IS THERE A CRISIS?

The U.S. Customs and Border Protection (CBP) reported the arrest of 100,441 undocumented migrants in February, up from 78,442 in January.

Although the trend increases, it still does not reach the data of May 2019, when the CBP apprehended 132,856 people.

Alejandro Mayorkas, Secretary of Homeland Security of the United States, rejected this Wednesday in Congress that there is a “migration crisis” by pointing to the “humanitarian crisis” created by Trump’s policies.

Sergio Prieto, an academic at the Colegio de la Frontera Sur (Ecosur) in Mexico, explained that the current situation “is not a new phenomenon,” so talking about a crisis could be used for political purposes.

“Now we hear the word crisis again and we see an increase in this type of militarization and immigration control policies, so we see that there is a cause-effect between this language and the policies,” he told Efe.

The researcher on migration studies and cross-border processes explained that the increase in the migratory flow from Central America is due to a worsening of poverty and violence in the region combined with the change of government in the United States.

Despite Biden’s new attitude, Prieto considered that the pressure from the United States towards Mexico has not changed, which just this week announced that the Mayan Train would be owned by the Army to “protect” the border.

“The change is only in form, not in substance. It is true that there is a very strong change of discourse. This new government (of Biden) does not assume a position of hegemony with respect to Mexico or such a belligerent position, but obviously it continues to be a matter of national security, ”he said.

Meanwhile, in the El Chaparral camp, migrants receive basic care from the Secretary of Health and civil organizations of the United States.

But they also perceive intimidation from CBP, which conducted a border protection test in San Ysidro, where they dropped gas bombs.

“It’s scary, but one who is a migrant has to face everything,” confessed a woman who identified herself as Maricelaó.