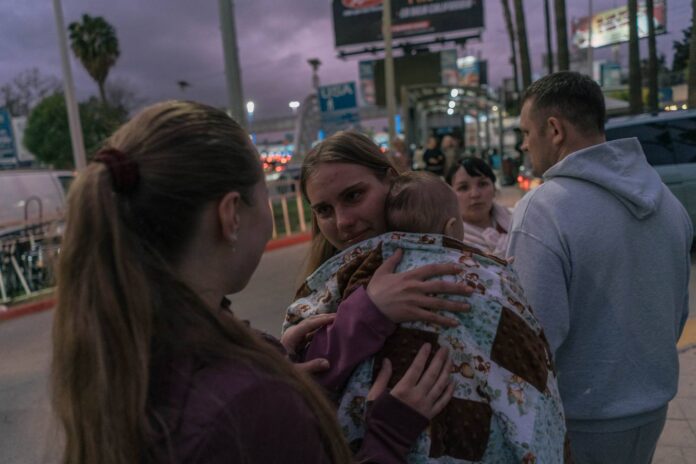 TIJUANA, BAJA CALIFORNIA — The list of Ukrainian refugees waiting to enter the United States is kept on a yellow legal pad on a folding table inside a blue camping tent, a few feet away from the multilane highway that connects Mexico to the United States.

It is written in English and Cyrillic by volunteers, many refugees themselves, waiting for their own numbers to be called.

“They said it could be two or three days,” said Valentina Shymanservska, No. 884, a sunflower farmer from outside Kharkiv.

“My turn is any minute,” said Svyastoslav Urusky, No. 319, a university student from Lviv.

By Saturday morning, the list had more than 1,200 names on it. Dozens more Ukrainians were arriving every hour. A van was shuttling them between the Tijuana airport and the tent where the yellow legal pad was kept.

“The list,” people began calling it in Tijuana, which required no elaboration.

The United States last month committed to accepting as many as 100,000 Ukrainian refugees, but it has yet to establish a way for them to arrive directly. There are no resettlement programs or visa pipelines. That has left Ukrainians in growing numbers to book flights to Mexico. They arrive at the U.S. border on foot, many pushing kids in strollers and dragging suitcases behind them.

On social media platforms and messaging apps, groups with thousands of members now explain the process in the Ukrainian language: From major European cities, fly to either Cancún or Mexico City. Ukrainians don’t need visas to enter the country. From there, take another flight to Tijuana.

A small encampment has sprouted about 1,000 feet from the U.S. border, where families are sleeping in tents and under tarps. It is the same tiny patch that has hosted refugees from around the world in recent years: Central Americans who were part of the caravans in 2018; Haitians and Cubans who arrived during the pandemic; Mexicans who fled a surge in violence this year.

But few refugees have arrived in Tijuana after such a circuitous trajectory of trains, buses, and flights. And few are processed as quickly by U.S. authorities. Upon arriving at the border, Ukrainians are granted humanitarian parole for one year.

Every Ukrainian in Tijuana had a different idea of how long they would stay in the United States. Some said they were planning to migrate permanently. Others said they would leave after their one-year humanitarian parole expired.