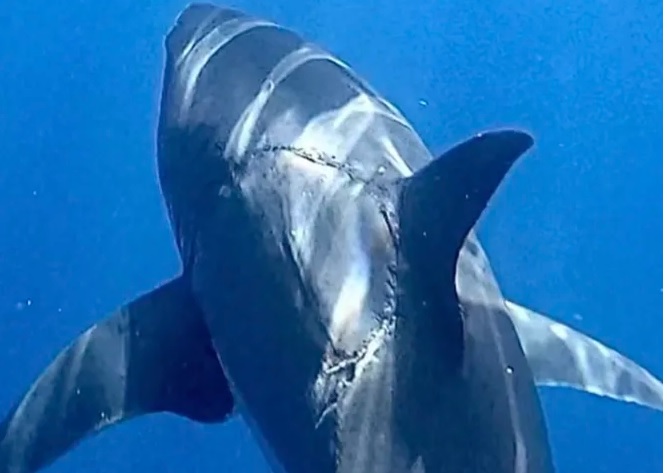 BAJA CALIFORNIA, MEXICO (January 1, 2022).- Guadalupe Island or Isla Guadalupe is a volcanic island located 241 kilometers (130 nautical miles) off the west coast of Mexico‘s Baja California Peninsula and about 400 km (200 nmi) southwest of the city of Ensenada in the state of Baja California, in the Pacific Ocean.

The various volcanoes are extinct or dormant. In 2005 Guadalupe Island and its surrounding waters and islets were declared a biosphere reserve to restore its vegetation (decimated by goats) and to protect its population of marine mammals and birds.

The island is a popular destination for white shark cage diving. Guadalupe Island is inhabited only by scientists, military personnel operating a weather station, and a small group of seasonal fishermen. The island is mostly arid and has very little surface water.

Photographer Jalil Najafov took the photo of a lifetime while diving in Isla Guadalupe, Mexico: He spotted a gigantic great white female shark with a ring of teeth marks around her side, encompassing her entire chest. The shocking photo garnered significant attention on social media.

“On rare occasions, during mating season among sharks, ‘mating scars’ appear on female sharks’ bodies caused by the males holding onto them. … These scars are mostly deeper cuts and punctures, indicating a more forceful motivation such as coercive mating from the male’s side,” said Najafov, who captured the image in early December. He added photos of other female sharks he had photographed with large bite marks.

But experts he talked to believed the big bite taken off the 15-foot female shark could be the result of a bite was from a mating encounter.

Tristan Guttridge, a behavioral ecologist and wildlife presenter for Discovery’s Shark Week, told Najafov that he didn’t believe the bite was from mating.

“Due to position as the wound [sic] looks like it’s healed a fair bit and although mating scars can be nasty they are more superficial than that. The shape of it to me likely indicates a bite from another shark – seems a bit extreme for defense,” he quoted Guttridge as saying.

Michael Domeier, another Discovery presenter and director of the nonprofit Marine Conservation Science Institute, told Najafov that he was “confident this is competitive aggression. I keep hearing people…describe this sort of thing as territorial aggression, but these highly migratory sharks don’t have a traditional territory.”

“That scar will heal to the point it won’t be a good distinguishing mark,” the expert said, per Najafov’s post.

Najafov said that he was “very lucky” to have spotted and photographed the scar before it fully healed.