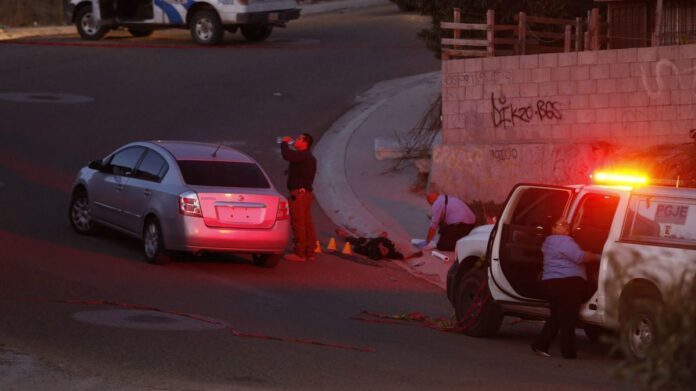 Seeing armed men in ski masks, entering their homes is part of the reality experienced by some Americans living in Tijuana.

On Thursday, the prosecutor’s office in Tijuana gave more details on the kidnappers who are being investigated for taking U.S. citizens hostage in Tijuana. But these types of crimes are not the only types these communities are exposed to.

“There are several accusations obviously the most solid at the time is that of kidnapping, they have not yet received a conviction,” said Hirám Sánchez, a central prosecutor in Baja California.

The prosecutor said they were able to uncover the kidnapping ring in 2020 thanks to the collaboration of the U.S. and Mexican governments.

But seeing armed men in ski masks, entering their homes is part of the reality experienced by some Americans living in Tijuana.

A man, who told Telemundo 20 he wants to be named as just “Cal”, was one of the last victims to file a lawsuit with the authorities, he said he suffered the worst moment of his life when these assailants pointed a gun at his 7-year-old son.

“’ You have a week to leave, or we will come back and kill everyone,’” he said of the threats he received. “My wife’s son got a gun to his head. It was like a nightmare.”

The prosecutor’s office confirmed having detected these criminal groups that had taken at least three homes of Americans in Tijuana, today the army and the authorities guard the houses.

“There was a cell of subjects between professionals and armed people who were raiding in this area of Tijuana and Rosarito, coastal area and various operations have been carried out in coordination with the defense secretary and the national guard,” Sánchez said.

Today, U.S. citizens who live in Tijuana as Cal says the only thing that keeps him in the city is the immigration status of his family. He said as soon as he is able to leave, he will.