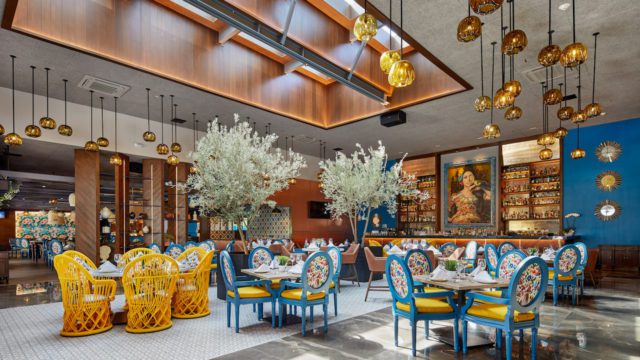 The Los Arcos restaurant group presents Lorenza as a fusion between the traditional flavors of seafood and the innovation of the new generations of Tijuana.

The Los Arcos restaurant group presents Lorenza as a fusion between the traditional flavors of seafood and the innovation of the new generations of Tijuana.

Under a completely new concept, the restaurant group intends for Lorenza to be the benchmark for Mexican haute cuisine while enhancing all the processes of culinary creation thanks to the fact that it has a sustainable fishing program. In addition, it offers organic ingredients from the Valle de Guadalupe, which, gathered in Lorenza, are presented in some specialties such as the Taco Lorenza, a cheese crust in a corn tortilla with chipotle, jocoque and coriander germ; or the Taco del Patron, the maximum expression of the Arcos with the zarandeado jumbo shrimp, in a blue corn tortilla and fried asadera from Sinaloa.

Despite the fact that Grupo Los Arcos has been in the restaurant industry focused on the flavors of the sea for nearly 44 years, with Lorenza they seek to go one step beyond their comfort zone and begin to explore the flavors of the land through cuts of imported from the USA so that diners can have an experience with first-class cuts that can be accompanied by spectacular cocktails such as their flagship cocktail, Cachanilla.

Another of the characteristic aspects of Tijuana is the warmth of its people, which is why Alejandro Angulo, founder of Lorenza, decided to open the restaurant on Blvd. Agua Caliente 10387, Plaza Paseo Chapultepec, Col Neidhart, Tijuana, 22020. With the purpose that it was the preferred stop for all those who visit Valle Guadalupe, Ensenada, or the surrounding cities.