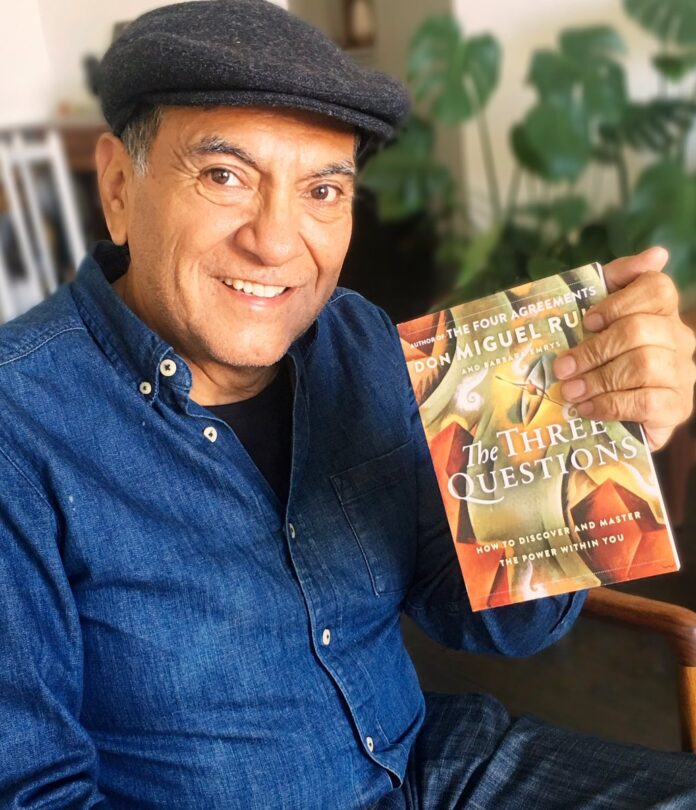 The author is a kind of spiritual guide for many, especially for celebrities and influential figures.

It arose, as it sometimes does, almost out of nowhere. One day he was a stranger and the next he was already a bestseller invited to important television programs. At least it seems that way from here, where he is not as well known as others of his lineage, such as Paulo Coelho, Osho, Tony Robbins, and Wayne Dyer, to name a few.

Don Miguel Ruiz is one of those writers who transmit messages of optimism, motivation, and personal improvement. Self-help, come on. And, it is known, they are not writers who enjoy that elusive quality that we call prestige. Rather, they are famous, commercially successful, and influential.

What would distinguish Ruiz from the aforementioned lot is an origin that seems humble. It seems because when inquiring about Ruiz in different places on the Internet, it is difficult to find something that casts a more or less nuanced light on his origins and the conditions in which he grew up. Rather, everything that is found seems to have been thought and written by press agents and publicists: a carefully narrated story in which Ruiz’s overcoming to get to wear the “Don” every time it is mentioned stands out, constantly. all the millions of copies he sold and the dozens of languages ​​into which his most famous book – The Four Agreements, first published in 1997 – has been translated.

In this story, there is a childhood in a “rural” Mexico (the exact location does not even appear in Wikipedia) and a whopping 13 siblings, of which Miguel was the youngest.

We continue in the same story and in it, there is an important time jump: suddenly Miguel Ruiz is no longer the youngest of 13 siblings. Now he is a young surgeon, who begins to practice with one of his brothers in the city of Tijuana. Another jump in time and now Ruiz suffers an event that radically alters his existence: a traffic accident places him on the brink of death.

Apparently, that brush with La Parca drives him to a vital swerve. Ruiz leaves the surgery behind and begins to write about some of the questions and uncertainties that this glimpse of the end of existence makes him glimpse.

Ruiz’s first step on his new path couldn’t be more auspicious. The book The Four Agreements is a resounding bestseller: millions of copies are sold like hot cakes and it doesn’t take long for the writer’s surname to become what English speakers call “household name”, that is, a name that is present in all households.

The term in English is not whimsical. Despite his name and his home country, Ruiz’s fame is essentially American and in English, not Spanish. In fact, there is not a single word in Spanish on his entire official site (he, meanwhile, resides somewhere in the state of Nevada, which is not in Mexico).

That book takes him on shows like Oprah Winfrey’s. A presence there is a remarkable amplifier of fame and success, in addition to that, it is also a legitimation for other celebrities to approach and thus reproduce the cycle of recognition and repercussion.

Those four agreements that Ruiz refers to in his book (and in all the talks, interviews, articles, and television appearances) begin with “be impeccable with your word” (that is: do what you say you will do). In a television note for the Univision channel in 2015, Ruiz himself says that this first maxim is the most important of all. “Because you are your word.” Then come “don’t take anything personally,” “don’t make assumptions,” and finally, “always do your best.”

With these postulates – simple to say but difficult to fulfill – Ruiz established himself as a kind of life guru or existential coach, capable of inspiring and motivating others, particularly successful people. An example is the American athlete Tom Brady, one of the great figures of “American football” who some time ago declared that Ruiz’s book was the “mantra” of his life. According to Brady, Ruiz’s pages taught him to “delegate, be more honest, and accept when things don’t go as planned.”

The success of that book continues to mark him. Although he has written many more titles, on his own or with others, the debut had such an impact that it continues to reverberate almost 25 years after its publication, more than 10 million copies sold and translations into more than 40 languages.

The traffic accident was not the only misfortune he has had. Almost 20 years ago, he was in a coma for several days. He recovered and took out another book: “The Toltec art of life and death.” In the title of that book, there is another key to Ruiz’s uniqueness: the Toltec as a feature to be highlighted. The style of the Mexican uses the word not from the historical rigor to designate the particularities of that culture. Rather, Ruiz uses the word as a signifier of imprecise and generic indigenous beliefs that can serve as inspiration to appease the frenzy of postmodern, urban and digital life.

Ruiz recently published the fourteenth title of his bibliography: “Eros – Return to unconditional love”, written with his partner Barbara Emrys.

The name of the book can lead one to think of the more romantic and “western” conception of love, with its insistence and demand for exclusivity and unconditionality (once certain conditions are met, paradoxically,) in love relationships.

However, already on the cover of the book, there is an image that is not compatible with that notion of love: a hand “stops” the arrows with which Eros, in Greek mythology, captivates the hearts of future lovers.

In reality, says Ruiz, this conception of love is the result of a series of stories that we are told from the moment we are born and that we later tell ourselves. “We tell ourselves stories so that our reality seems a little more real (…) We have been telling stories to other human beings for thousands of years to communicate things and to entertain ourselves. And regardless of how we tell them, each story is made up of the same essential components. It has its beginning and its end. His dialogues and turns. And its heroes and villains ”.

Ruiz borrows concepts from Neuro-Linguistic Programming (NLP) when he writes about stories that are “programmed” in the brain and then influence world views and how they then intervene in behavior.

Bottom line: If you are “programmed” with certain ideas during childhood, those ideas will have a major influence on into adulthood and can shape behaviors for both good and bad. But not only: one could be “reprogrammed” to change the integrated circuits of the mind.

Therefore, the Mexican maintains, it is possible to acquire a different conception of love, one that is not romantic, but more generous and realistic.