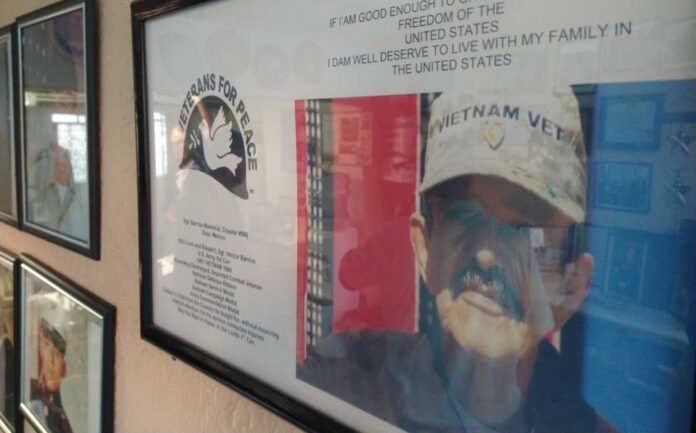 Many of the Mexican veterans who served the United States Army were deported for committing crimes, even though they served in various wars such as Iraq, the Balkans, and even Afghanistan.

Exiled from the United States, a country they swore to protect from any threat and enemy, despite being born in another country, hundreds of war veterans have been left to their fate in Mexico, a country that, paradoxically, they do not know.

In Tijuana, there is a group of soldiers of Mexican origin who were deported from San Diego, California, overnight. They left Mexico when they were children, without a home, without work, and speaking little or no Spanish.

Many of them were deported for committing a crime while residing in the United States. (Special)

Despite having put on a military uniform and defending with their lives the maxim of “no one is left behind” which is like a mantra among every element of the US armed forces, now, these deported veterans feel betrayed, and they regret that yes, despite everything, they were left behind.”For me it is completely

unfair after having served the nation, exposing their lives (…) In this process, I felt betrayed in the sense that all my life I had done there and

I made a mistake, I made a mistake, and for that mistake, they are deporting me, “says in an interview with MILENIO Albino, a deported veteran who now spends his days in Tijuana working as a translator after an incident of family violence that exiled him from the United States.

The number of veterans of the United States army who were deported to Mexico is not clear, some activists say that it could be hundreds, distributed especially in border cities such as Tijuana and Ciudad Juárez, but it is one of the first pending tasks in the matter: the realization of a census, and then a case-by-case review.

It is known that there are deported veterans living in more than 30 different countries including, in addition to Mexico, places like Vietnam, India, Italy, and some Central American nations like El Salvador, Honduras, Guatemala, and Nicaragua. So the figure could reach thousands.

“When you go to war, are you willing to give your life, and when you’ve made an error instead of helping you rebuild your life give you a kick like you’re worthless, of no value,

A lot of guys, even with that, they are willing to one day continue fighting if necessary, “says Robert Vivar, co-director of the Unified Resource Center for Deported Veterans of the United States.

After years of activism, which arose precisely in Tijuana, the government of Joe Biden is currently taking official measures to help deported veterans return to the United States.

It is planned, according to the Democratic administration, to make a review of the immigration policy to allow them to return home and it is also planned to remove the barriers so that the military, finally, naturalize the country they swore to protect.

This announcement from the White House is understood as a way to soften an old law approved in 1996 by the administration of the then president, Bill Clinton, which expanded the parameters of expulsion from the country to minor offenses.

Which put in check all migrant veterans who were not naturalized, for one reason or another. Yes, in the United States you can enter the military only as a legal resident.

They ask the Biden government to return after serving in the United States Army. (Special)”

We are committed to bringing back members of the military, veterans and their immediate family members who were unjustly expelled and ensuring that they receive the benefits to which they may be entitled.

Today we are taking important steps to make that a reality. ” said the Secretary of Homeland Security, Alejandro Mayorkas, last July.

For Robert, who runs the Tijuana veterans’ home, the ad brings with it an avalanche of hope, which almost everyone had completely lost once they were exiled.”

It is a new hope of one day being able to return home, to return to see your children, the place where you grew up. It is something that lifts your spirit and gives you the courage to continue fighting, not to give up,” he said. the activist.

He maintains that, for the moment, what the US authorities have indicated to them pending the dissemination of the parameters for review of cases by the Department of Defense and Homeland Security, is that they support them, to locate how many there are and where they are. deported veterans and their families.

“Obviously, we are very happy, but we want to anticipate that process a little bit because we are uncertain that all deported veterans will not be given the opportunity to review their case. In particular, because normally the legislation that has been introduced earlier they say nothing else applies to eligible deported veterans, “he said.

Veterans served in all of the United States’ wars that followed after Vietnam.

In these immigration laws, it is explained that the figure of “eligible” refers to a war veteran who has finished his service honorably, that is, who has a certificate of discharge with honors. In addition to not having in his history any crime with violence or health problems.”

There are many veterans who have been deported who, indeed, were not given their certificate of honorable discharge for some problem they had within the service. Let’s say, drug addiction, that you have been drunk and have had some problem or some problem on the part of the authority suddenly, when you have a disagreement with a superior and he doesn’t like you writes you up in a report and get rid of you, even if you have two or three years of serving honorably or you’ve been in combat, it doesn’t matter, ‘” said Vivar.

They have been deported after having served in virtually every post-Vietnam war: the Persian Gulf, the Balkans in Bosnia and Kosovo, Afghanistan, Iraq, and Libya. Most of the time, according to the veterans interviewed, Mexicans along with the rest of the Latino contingent are put to the forefront in the vanguard.”In each of the battlefields, in each of the combats, the number of Hispanics is very high, from Vietnam to the present, Hispanics do not change their bravery, their courage, their sense of defending their nation (…) He is not always appreciated, and especially when we talk about deported veterans, what kind of gratitude is that? “, Said Vivar.

Many of them were recognized by their high command, today they are forgotten on the other side of the border. (Special)

Most, as Albino came to the United States while still children, led a normal life in that country, and became legal permanent residents. As their dream was to be soldiers they joined the army. But after returning to civilian life they committed crimes that led to deportation. They are deported after they committed a crime or a series of crimes that is on the list of the Immigration and Customs Enforcement Service (ICE).

The big problem is that most believe that simply by serving in the United States Army, they are automatically given citizenship, but one can serve as only a legal resident of the country. So if at the end of their military service, someone commits a crime that warrants deportation, before the law they are still permanent residents, not war heroes, and can be expelled, even for a traffic incident.

There is an 85% increase in Americans living in Mexico