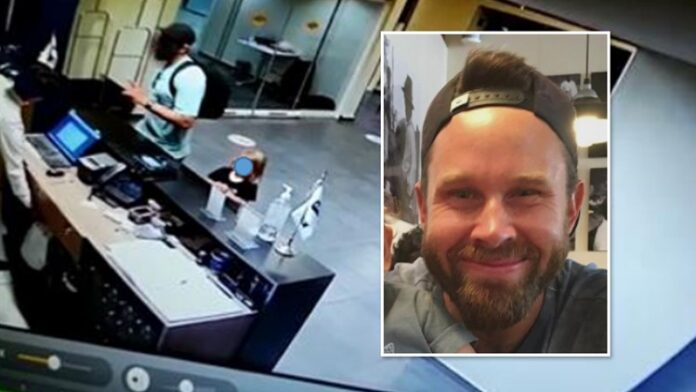 Matthew Taylor Coleman is charged with two counts of foreign first-degree murder of United States nationals and could face the death penalty.

A California father who said he was enlightened by QAnon to kill his 10-month-old daughter and 2-year-old son with a spearfishing gun in Mexico was indicted Wednesday by a federal grand jury in San Diego, according to authorities.

Matthew Taylor Coleman, 40, is charged with two counts of foreign first-degree murder of United States nationals, the U.S. Attorney’s Office for the Southern District of California said in a statement.

Coleman, a surfing instructor from Santa Barbara, could face the death penalty, according to the statement, which noted that the attorney general “will decide whether to seek the death penalty at a later date.”

A criminal complaint filed last month accuses Coleman of killing his children “by shooting a spearfishing gun into their chests.”

He confessed to killing the children, according to the complaint, telling investigators that “he believed his children were going to grow into monsters so he had to kill them.”

“Coleman explained that he was enlightened by QAnon and Illuminati conspiracy theories and was receiving visions and signs” that revealed his wife was telling him “he was saving the world from monsters,” the complaint said.

According to the document, Coleman said he knew it was wrong to kill his children, “but it was the only course of action that would save the world.”

Coleman’s wife called the police on Aug. 7 to report that her husband left with their two kids. The family was supposed to go camping together, but instead, Coleman put the children in their Mercedes-Benz Sprinter van and left. She said they hadn’t argued and had no reason to believe her husband would harm her children, but she was concerned because he hadn’t taken a car seat.

The next day, she reported them missing and police helped her track Coleman using the “Find my iPhone” app. His last known location was in Rosarito, Mexico.

On Aug. 9, still using the app, friends of Coleman’s wife’s showed police that he was moving toward the U.S.-Mexico border. When authorities met him there, he did not have his children in the van.

Once the children were reported missing, Mexican officials reported they had found two children’s bodies matching their description in a ditch. The baby and the toddler had “large puncture wounds in their chest cavities,” the criminal complaint said.

Authorities said Coleman confessed to moving the bodies into some brush 30 yards away from where the children were killed.

“There are no words to describe the profound grief that envelops an entire community when a child is murdered,” acting U.S. Attorney Randy Grossman said in the statement. “The Department of Justice is determined to achieve justice for these victims and their loved ones.”