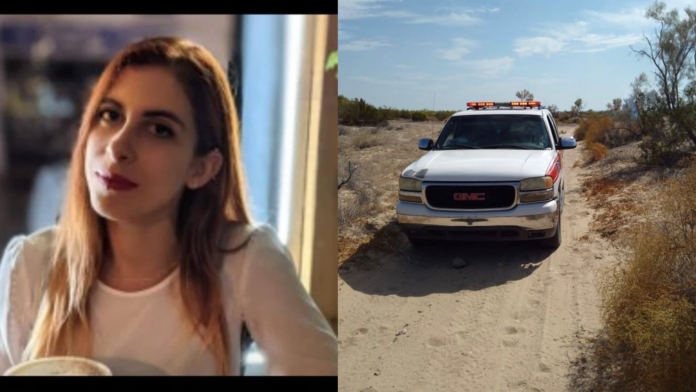 They went through the Valley of the Giant Saguaros

The couple was in a vehicle that got stuck in a dirt area and they decided to walk under the intense heat of the area, José Luis took refuge in a shadow after feeling bad, but the young Spanish woman decided to continue her walk in search of help.

A young Spanish woman disappeared in the Mexicali desert right on the San Felipe to Puertecitos highway, according to the disclosed information.

The report was made around 6:00 p.m. on Thursday, four hours after the disappearance

The young woman of Spanish origin, María Dolores Márquez Muñoz, who was reported missing on the night of August 26 in San Felipe, was found dead on Friday 27, in a depopulated area in Los surroundings of the same town.

The search for the young woman began yesterday, as a result of the emergency report made by the boyfriend of the victim named José Luis López González, who said that they rented a Volkswagen Golf car, with plates WFJ8188, in the municipality of Tijuana and They transferred to the Santuario field, located at kilometer 11 + 500 on the San Felipe-Puertecitos highway.

The couple arrived at the point, but found out it was a private field, so they moved back onto the road. However, during the journey on the dirt road, the vehicle got stuck.

Given the emergency and the lack of communication, the couple began to walk through the desert, but after two hours without results, they began to suffer the ravages of the intense heat in the area, which has reached over 50 degrees during this season. .

José Luis narrated that he began to feel bad, from weakness to vomiting, so he took refuge in a shadow. Unlike him, the young Spanish woman decided to continue her walk in search of the road. He did not see her alive again.

José Luis recovered after a few hours and continued with the walk and reached the road where he managed to ask for help from travelers in the area.

Upon reaching the community, they requested the support of authorities from all the corporations and rescuers, who undertook the search. The operation spread throughout the area in various groups. The operation culminated this Friday afternoon with the location of his remains in the desert.

The cause of death was heatstroke, making her the 24th victim so far this season this summer in the Mexicali desert.