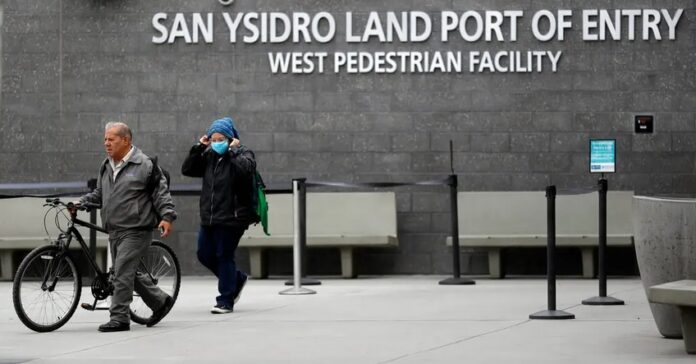 TIJUANA, BAJA CALIFORNIA(June 26, 2021).- A group of southern California lawmakers, including San Diego’s mayor, called for an end to pandemic restrictions along the border with Mexico as part of an effort to boost the local economy.

“As the rate of COVID-19 cases continue to plummet, and other restrictions have been lifted, I see no reason to continue selective restrictions that impact our cross-border community,” Mayor Todd Gloria said in a press release.

The border has been closed to non-essential travel since March 2020. The Dept. of Homeland Security last Sunday extended through July 21 those restrictions for all land or ferry crossings into the US.

San Diego’s San Ysidro district, which touches the border, saw retail sales drop to $250 million in the 12 months ending in March, according to the local chamber of commerce. That was down from nearly $900 million in the same year-earlier period, the chamber’s Juan Miguel Hornedo told San Diego Red.

About 200 businesses in San Ysidro closed last year, he said.

“Over the last year, we’ve lost 1,900 jobs. Those are 1,900 families that counted on their jobs to feed their children that no longer have that option,” the chamber’s Jason Wells told San Diego’s KGTV last week.

Non-essential travel to Canada and Mexico will continue to be restricted, while “ensuring access for essential trade & travel,” Homeland Security said on Twitter. But the department also said it had seen “positive developments” that might lead to easing restrictions.

“I welcome this note of hope but every day legal border crossings are limited is extremely harmful to San Diego’s economy and the small businesses that power it,” Gloria responded.

San Diego supervisor Nora Vargas said: “Any delay only exacerbates the impacts of the pandemic.”