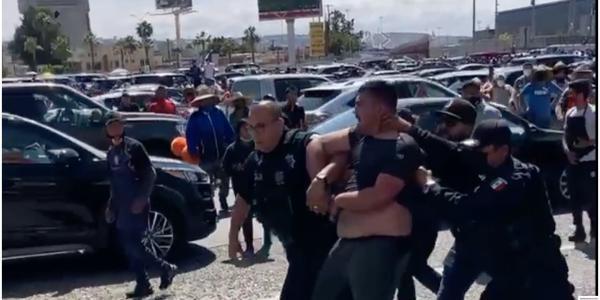 Vendors in the area stopped the driver from escaping

This Sunday afternoon, users of Facebook pages of “How is the line” began to share videos and photographs of a terrible scene: a group of people attacked a car in the San Ysidro checkpoint because a man allegedly ran over to a child.

There are several videos circulating on the networks, in one of these Mexican police officers are seen leading a man to the patrol followed by a mob that shouts annoyed that it has run over someone, the screams complete that it was a child.

There is also another video where a car is seen with the windows completely destroyed while people surround a man who is rescued by the police, who appears later escorted and with his shirt half torso.

In the video bad words are heard and one person says: “they want to lynch him.”

So far it has not been confirmed if it was a child, the only information that is available is that a disturbance was generated in the sentry box in which this person who is seen in the video was involved.