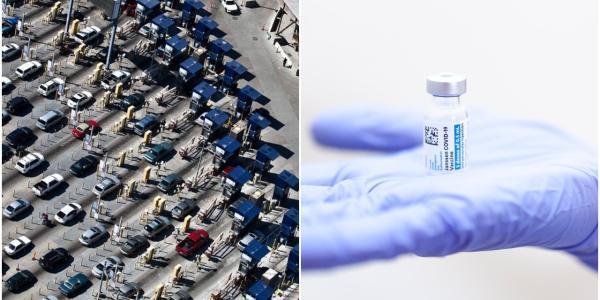 Those who will receive this vaccine are those between 18 and 39 years old, since in Baja California the vaccination of adults over 40 years has already begun

After being informed that the United States will donate one million vaccines to Mexico from the Johnson & Johnson pharmaceutical company, specifically destined for the 40 municipalities that border that country, including those located in Baja California; the head of the Secretary of Health of this State, Alonso Pérez Rico, gave some details.

In the first place, in addition to Tijuana and Mexicali, the Secretary assured that Tecate will be another of the municipalities of this entity that will be able to vaccinate its population between 18 and 39 years of age with the American vaccine.

Let us remember that the objective of applying this vaccine, which only requires one dose to complete the vaccination schedule, is to reopen the non-essential border crossings between Mexico and the United States, which have been restricted since March 2020.

It is worth mentioning that with the vaccine sent by the neighboring country, a third of the population between 18 and 39 years of age in the border municipalities involved will be vaccinated, while the federal government will provide the rest of the vaccine to complete 100% of the vaccination in this population of the border strip.

Baja California recently began vaccinating adults 40 years of age and older, so once the application days with this sector are over, and in turn, the Johnson & Johnson doses have been applied, “we will quickly reach herd immunity , over 80% of our vaccinated population, and that is what is required to open the border, “said Pérez Rico, who added that with herd immunity the mortality rate drastically decreases.

According to the head of this agency, Tecate could be receiving approximately 40 thousand doses from the US, Mexicali 350 thousand 269, and Tijuana 700 thousand 913.

What will be the vaccination plan for this population? Pérez Rico said that the same work will continue, with massive vaccination sites, and only modules will be installed where the Johnson & Johnson vaccine is applied.

Until this morning, among the people who received one or two doses of any of the Covid-19 vaccines in Baja California, there is a total of 1, 008, 728 doses applied.

But, according to the Secretary of Health’s report, only 377,875 people have completed their vaccination schedule, which means only 14% of the population.