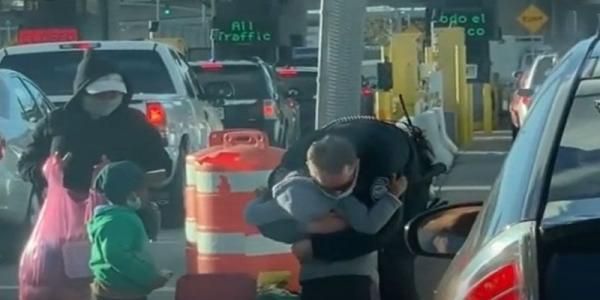 Since yesterday, a video has gone viral on social networks in which an agent from the United States Customs and Border Protection (CBP) tenderly greets two children who accompanied their mother on the border of San Ysidro, located in the city of Tijuana, Baja California.

In the recording, you can see the moment when the American agent approaches both infants and their mother, who works as a street vendor at the sentry box. Later, the uniformed man hugs one of the infants and then greets his brother, addresses a few words to his mother, and leaves.

With comments such as ” not all migrants agents are bad ” and ” how beautiful “, users on Facebook and Twitter have reacted to the tender moment, spreading the video, which has already made it a national phenomenon. The act did not surprise the world but confirmed that indeed, there are also police officers who care and treat everyone with dignity, regardless of the position they hold, as it should always be.

After Joe Biden took office as President of the United States of America on January 20, the policies implemented in the matter of migration have caused controversy in a large part of the American population, mainly in those people who are sympathetic to former President Donald Trump.

The protection of the DACA program (in Spanish: Deferred Action for Childhood Arrivals), the suspension in the construction of the US-Mexico border wall, and the commitment to reunite migrant children who were separated from their parents under the law ” zero tolerance, ”are among the first actions Biden took to reverse some of the policies implemented by Trump during his 2017-2021 term.