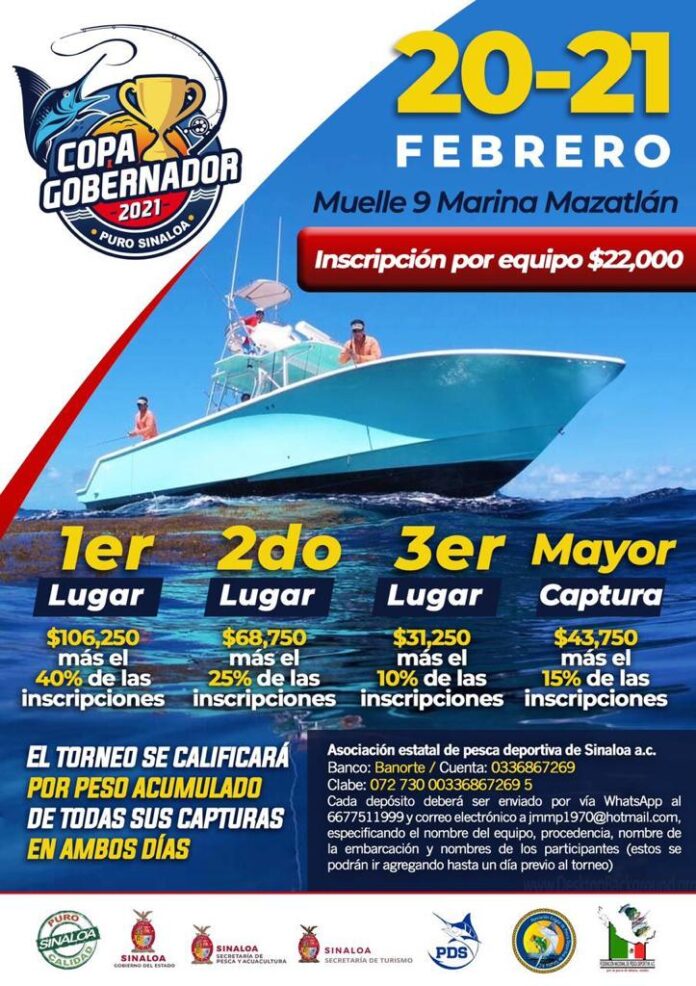 This series of events that will be taking place in the port, will serve to try to compensate for the lack of massive events that were suspended due to the health emergency

Mazatlán, Sinaloa.- Highlighting the importance of the economic impact that this event would have on the port of Mazatlán, the Secretary of Tourism, Óscar Pérez Barros, pointed out that the port is not only “beach and sea.”

The event, which will take place from February 20 to 21, will be a unique opportunity to show the other side of Mazatlan tourism because as Pérez Barros pointed out, most visitors consider that Mazatlán is only sand and sea.

“They just see us as the beach and the sea and the weevil (referring to the fish) that’s how they see us from the outside, they don’t know there is more, the world record is held by the Picachos Dam, you get up to a hundred a day (fish) is the prey that produces more fish and more seabass worldwide, “said the official.

He said he estimated that the spill could exceed one million pesos, however thanks to this series of events that will be taking place in the port, they will serve to try to compensate for the lack of massive events that were suspended due to the health emergency.

“Each participant and in this type of competition is in the family and Mazatlán lends itself to that … It is not only the fisherman, but this event can also leave us (they are estimates) between 1 million 200 thousand of direct economic income to Mazatlán,” he explained.

As has already been reported, the enlisted fishermen will go for an award valued at 250 thousand pesos that will be complemented with 90 percent of what is collected for registrations, whose cost is 22 thousand pesos per team.

The first place will take 106,250 – plus 40 percent of the registrations – within the podium in which there will also be economic incentives for the second and third, as well as the one with the highest catch.

The winning team will obtain the right to participate in the National Big Game 2021 Championship with the representation of Sinaloa (does not include registration cost) to be held in Huatulco ( Oaxaca ) from November 5 to 7, 2021.

Pérez Barros reported that participants from the United States, Canada, as well as entities from Mexico, who, he said, will be provided with all health care and hospitality “so that they can take a good image of the event.”

It will be awarded with 250 thousand pesos, plus 90 percent of the proceeds of the inscriptions as follows:

2:00 p.m. to 4:00 p.m. Reception of files, captures and videos and registration closing

17:00 Publication of results (from this publication, and up to 30 minutes later, protests may be made if they exist)

“At the moment mass events cannot be held due to the problem of the Covid-19 pandemic, but these, such as fishing tournaments, because they are outdoors, can be controlled since there are not many people, Certainly, all health care will be provided according to the protocols, to avoid any contagion ”, he added.