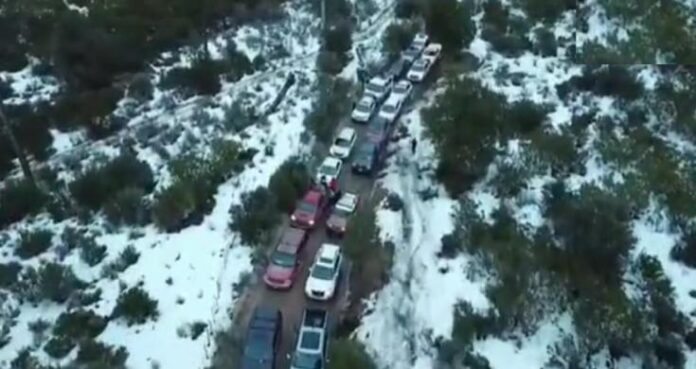 The road to Hanson Lagoon was blocked by a rollover

Despite warnings to stay home and not go out due to the Covid-19 red light, more than 100 cars were stranded last Sunday on the road to the Sierra de Juárez.

Hundreds of people planned to visit Hanson Lagoon and were unable to reach their destination, as a car overturned did not allow access to the area for hours, leaving them trapped in the traffic jam with very low temperatures.

Civil Protection personnel came to the site to help in the mishap that extended for more than 4 kilometers. By 8 AM on Monday the road was clear with no injuries or damage reported.

After what happened, the Royal Delegation of the Castle of the Ensenada municipality shared an important notice where it requested support through voluntary economic cooperation to tourists and Baja California citizens, as a result of their visit, the roads adjacent to the Sierra de Juárez, Laguna de Hanson and Cordillera de Molina, suffered considerable damage.

It is worth mentioning that the corresponding repair is given the state in which said roads were left, it is estimated that it will be a working day of approximately 300 hours of use of machinery, being an equivalent to four times more expensive than previous years.

You can find the full document here below: