Tijuana, Mexico (CNN) – Stay home, stay safe, but starve. Get out, earn your living, but risk your life. For many in Mexico, this has been the impossible choice of the pandemic.

And it is quite a difficult choice if you are a businessman or a taxi driver. But it’s on another level if you are a sex worker.

“I’m very scared for my health,” said Alejandra, a sex worker in Tijuana, who asked that we only use her first name. “I don’t know if the person I’m with has the disease or not.”

Women in short dresses and high heels stand along the sidewalks, beckoning groups of men to spend some time and money on them. The huge strip clubs , some with attached hotels, act as de facto brothels.

Many specifically cater to the thousands of Americans who cross the border from California each month, in search of a kind of entertainment that cannot be found legally in the United States, except perhaps in some Nevada counties where prostitution is allowed.

Everything is legal here, or at least it was until the pandemic broke out.

The Government of Mexico closed its economy at the end of March. Non-essential businesses were forced to close, even in the state of Baja California, where Tijuana is the largest city.

That meant all the strip clubs , bars, sex hotels, and even the sex workers on the sidewalks, were forced to shut down their businesses, with restrictions that remain in effect today.

The land border between the United States and Mexico was also closed to nonessential travel. Everything was done with the intention of slowing down the spread of the virus.

But on a recent reporting trip to Tijuana, it became very clear that while the sex industry is not as vibrant as it was before the pandemic, there is a lot of sex behind closed doors.

There is something strange about standing in an empty strip club with the lights on. But that’s where we met Roberto Torres, owner of the El Zorro Men’s Club, just off the main street of the district.

“I don’t think we’re safe to open yet,” he told us. “Therefore, I am not putting myself or my employees at risk.”

He had to fire all his female employees. He says most went home, but for those who didn’t, he has an idea where some might have ended up.

Reopening your business would be illegal, but in Tijuana, it’s clear that other business owners don’t care. “People are opening, certain places are open, certain [sexual] hotels are open,” he said.

The new way of life is risking your life

Almost 8,000 women workers are registered with the government, but there are likely hundreds, if not thousands more, who are not registered.

Many have left town or stopped working, according to local state police CNN spoke to, but there are those who stayed because they are supplying the remaining demand.

Although the border is officially closed to non-essential travel, there are exceptions for those with dual citizenship and few vehicles are detained by Mexican officials to be searched. So it is relatively easy to take a short trip.

And some Americans still come here to have sex.

They do it with people like Alejandra, whom we found working near a migrant shelter in the city.

She cautiously agreed to speak with us in a private location. CNN producer Natalie Gallón lent him casual clothes so as not to attract the attention of the hotel staff when we arrived.

“Things are really bad for me, right now,” said the multi-year veteran of the industry, now in her 20s. “I am very worried, every day.”

She said the pandemic has hit her in two ways, watching her customer base decline and also exponentially increasing the risk of an already dangerous job.

“I just have no idea what’s going to happen, or if I’m going to get infected,” he said, shifting nervously from side to side in his chair as we talked.

She has tried to implement additional sanitary measures. Her clients now have to shower and wash their hands before being with her. She has implemented a no-kiss rule and uses hand sanitizer gel throughout the process.

But this is sex. Physical contact is inevitable. Alejandra knows it but says she has no other choice. The only way she can support her 6-year-old daughter is by going to work. 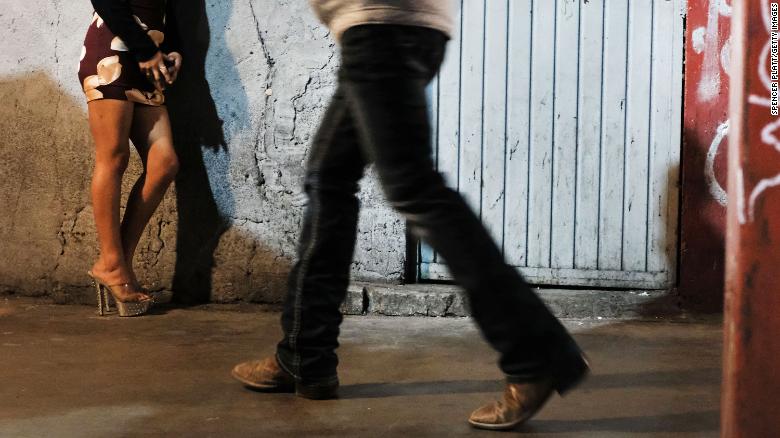 Another sex worker we spoke to who goes by the name Adanna said that she has only been able to afford not to work because two of her regular American clients send her some money every month.

“Without them, I don’t know what I would do,” saying that even with the payments, she barely puts food on the table for her 5-year-old daughter.

If the government says it is safe enough for businesses to reopen, Adanna told us she would go back to work immediately.

Jaqueline Aguilar, 34, a transgender sex worker in Ensenada, about two hours south of Tijuana, told CNN by phone that she returned to work because she had to make ends meet.

She has been a sex worker since she was 13 years old and her everyday fears have changed since the pandemic hit Mexico.

«Before, my fears were of violence, that a client would kill me or hurt me. Now, my fear is the pandemic, going out and God forbid that I get infected and cannot work. How would I eat?

The government tracks workers in different industries who have contracted the virus, in sectors such as health. There are no such data for sex workers.

Aguilar, who is also the founder of an organization that supports transgender women and women in the sex industry, says she knows at least three colleagues who had COVID-19 symptoms but were never tested. Rather, she said, they isolated themselves at home.

We talk to business owners and sex workers during the day in Tijuana, but the only way to get a real sense of the situation in the red light district is to go out at night.

This is not a place where journalists are welcome, so we walked the streets with the Baja California State Police.

At first glance, many companies seem closed. The front doors of some of the biggest and most famous strip clubs are closed. Smaller places have lowered metal doors.

“The business is still going on,” said the police commander who was driving the truck we were in. “It’s just happening behind closed doors.”

That fact was quickly confirmed by the Americans we saw and heard on the streets and an American we met, standing in front of a sex hotel where he had stayed for a few days, hiring different women.

“There are a lot of Americans here,” said the man who appeared to be in his 50s and asked that we not use his name. They cross the border and come here and do their thing.

He said he is doing things to stay safe, cleaning his hotel room with antibacterial wipes and not eating indoors. All very safe, except for the part where he has sex with a stranger, about which he says that he and other Americans here have no problem.

“I think I’m pretty well informed about all this,” he said. When asked about the fact that viral epidemiology experts would universally disagree with him, he said only that he feels “completely safe.”

His ignorance of the risks is what puts the lives of the women he hires at risk. But it also helps them put food on the table.

They are the two sides of a very dangerous coin.