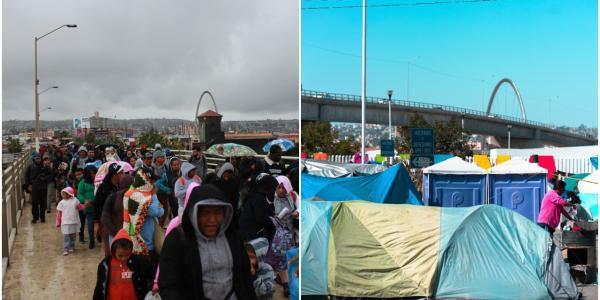 As residents of a border city, we know it well: there have been Central American migrant camps for more than a year, camping in the Tijuana-San Diego and Reynosa-MacAllen checkpoints. Therefore, the US media have shared that the United States has asked Mexico to dismantle these camps.

The US authorities argue that their stay in the area is at risk because they attract criminal gangs.

Even Joe Biden, the current president of the United States, is said to be pressuring Mexico to handle the flow of migrants that ends up at the Mexican border.

Likewise, the United States government has also been asking Mexico to break up the camps completely, concerned about the possibility of large groups organizing and trying to enter the border.

In the same way, they are concerned that cartels will find easy prey for migrants.

According to the information, there are at least 2,500 people in both the Reynosa camp and the Tijuana camp, numbers that could rise with the recent incursion of a new group into the Mexican republic, which the Civil Guard recently failed to control. .