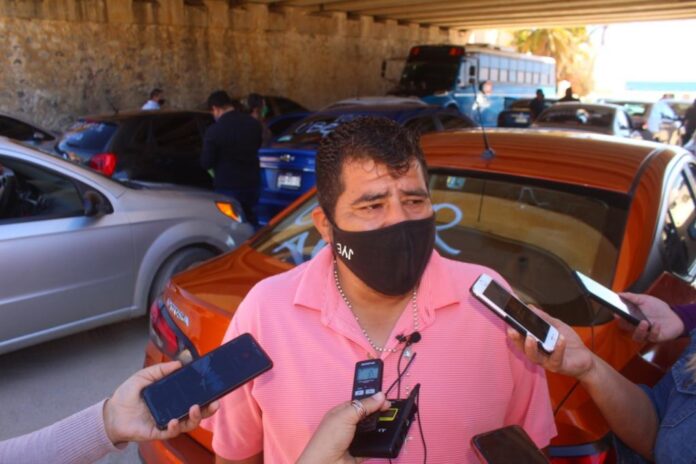 Tired of harassment and not being allowed to work freely, drivers of the well-known digital platform (UBER) this Monday, February 8, gathered to demonstrate peacefully to say “we are not criminals, let us work. “

At 10:30 a.m., a large number of drivers from both the Municipal Headquarters and Cabo San Lucas met at the Costa Azul bridge to start their pilgrimage through the hotel zone, passing through the Centenario boulevard, arriving at the Transpeninsular highway to the San Bernabé neighborhood, returning to Plaza Antonio where they demonstrated in front of the Municipal Palace.

In this regard, Luis Cortés, a driver by profession, said “the main disagreement is the harassment, persecution, and hunting that this Armida Castro administration has against us, she says that it is doing it because the Transportation Law prohibits us from operating, but really the Transport Law does not prohibit, because it does not stipulate the applications.

We are already fed up with the fact that they are persecuting us as if we were criminals, when in fact all we do is give a service to the people who need it ”.

He stated that, although each State has its own laws, in Los Cabos they have been done as a way to prohibit the service between individuals and private parties, something that the Transportation Law does not stipulate, hence the importance and need to update it since the one that is in force today It is more than 20 years old, and today more than ever mobility is a necessity.

He stressed that in addition to this the law does not specify a fine for them as participants of a platform, therefore, what is not prohibited, is allowed, however, it has fines that only in one year amounted to just over 4 thousand pesos up to the almost 20 thousand pesos.

Likewise, he expressed his dissatisfaction with the actions of the Municipal Director of Transportation, who they say is a taxi driver, therefore there is no interest on his part and with this, what they call “Mafia of Taxi Drivers” is still present, which he explained is made up of a group of politicians. that were previously served with the large spoon, having plates at their disposal and being distributed among families and it is these same ones who do not want the platform to operate in Los Cabos.

He revealed that they do not expect anything from this administration, but at the beginning of the electoral times, they trust that those who are favored by the votes may have the political capacity to be able to solve this problem, which he assures the current Municipal President lacks.

For his part, Jorge Randú, who is also a driver, said that this is not the first peaceful demonstration that they have carried out since a week ago they carried it out in the Cabo San Lucas delegation, but unfortunately with this, they received more harassment from the authorities of Public Transport who sometimes in a day come to offend up to 10 fellow drivers.

“We have seen checkpoints throughout the neighborhoods, in all the shopping centers, they don’t let us work, the inspector works all day, on Sundays they don’t really work, the taxi drivers pay the inspectors to report to the centers commercial”.

He revealed that the hotel zone is also restricted and all this has generated a drop in services of up to 50%, which has directly affected its economy.

To conclude, he declared that three months ago he personally suffered harassment for being the driver of the platform, as he was arrested and beaten by Public Security authorities, which is why he has already filed a complaint, but so far he has not received a further response than a follow-up call.