On October 11, between 2:30-4 p.m., hundreds of “cowboys and cowgirls” trotted and galloped their horses across the Boulevard 2000 freeway in southern Rosarito.

“There were about 700 horses documented,” said Diego Knight of the Infonort news outlet, “at that moment, it was windy, and I couldn’t fly my drone to capture the long line of horses.”

Knight, an American who moved to Rosarito in 2014, speaks English, Spanish, and Korean. We communicated on October 20, as he direct messaged photos for the article. 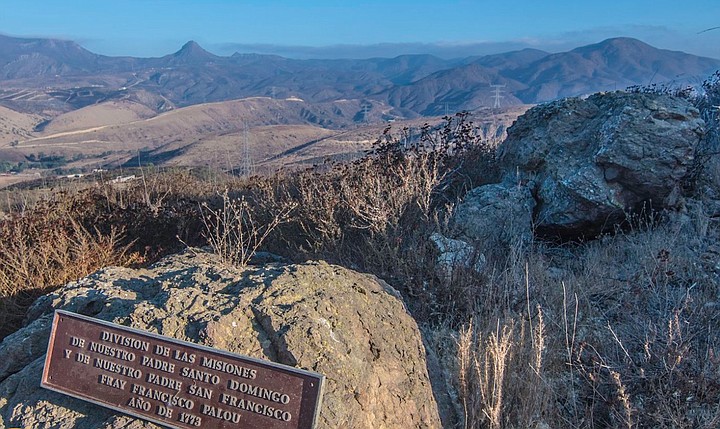 “That photo of the horseback riders riding along the shoulder of Bulevar 2000 with the policeman in the frame, is north of Baja Studios.”

Earlier that Sunday morning, at about 9 a.m., horse owners, groomers, and riders, and the horses they rode on, rendezvoused with family and friends at the historic mountain top. The rendezvous point is a few miles east of Primo Tapia, a subdivision on the south end of the beachfront city about a 30-mile drive south of the San Diego/Tijuana border-crossing. 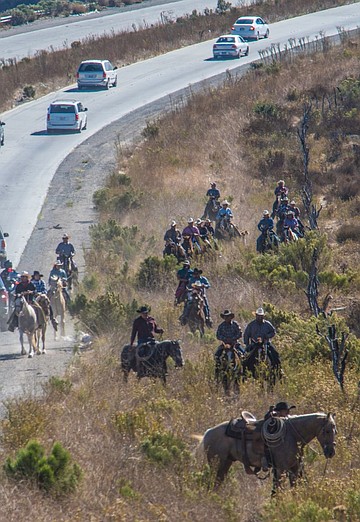 “It was windy, and I couldn’t fly my drone to capture the long line of horses.”

The gathering was the Cabalgata Fiesta de las Fronteras (border festival parade), organized by Sociedad de Historia de Rosarito. According to the event’s Facebook page: the annual horseriding festival/parade commemorates “the two intermission historical divisions of California: the first in 1773 and the second in 1788, before the current political dividing line between Tijuana and San Diego, was declared through the Treaty of Guadalupe Hidalgo, beginning in 1848. [Settlers] located the two political/religious divisions within the Rosarito municipality: the first in the Valle de Los Médanos and the second in the Arroyo de Rosarito.”

Knight has covered the near 12-mile cavalcade since 2017. This year, he noticed horseriders trekked in from other Baja municipalities; a handful came from southern California. 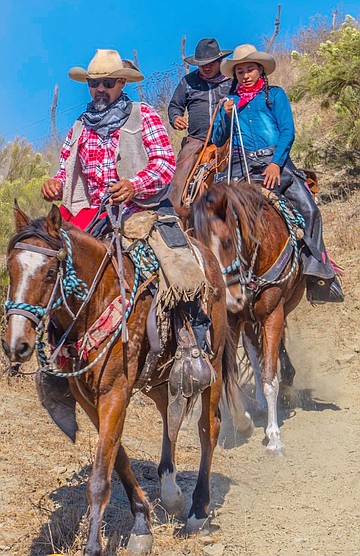 “This gathering was our first big event in Rosarito for this year.”

“We met with the mayor, a priest, a shaman, and the organizer at the top of the hill by the cross. A ceremony preceded.”

“There were more riders out, and during the rides, we noticed the burnt grass from the wildfires two months ago.”

“Were the horses bothered by the smell of the burnt grass and brush?” I asked.

“I don’t think the horses were bothered by the smell,” he responded. “If anything, they might’ve been bothered by the heat; that day was hot. Some of the horse riders wore bandana masks with their sombreros. Keep in mind — this gathering was our first big event in Rosarito for this 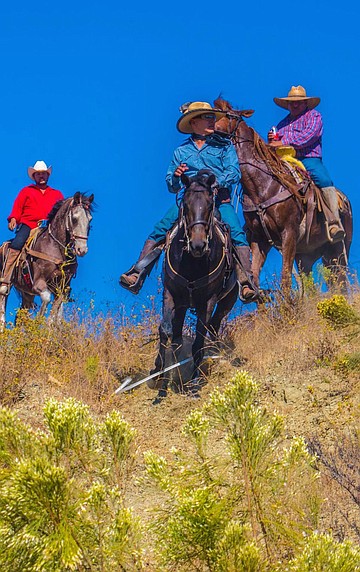 “They walked down a long dirt road and reached the arroyo.”

Rosarito, located between Tijuana and Ensenada, shut down in March before spring break due to the pandemic. Days before the Sunday horse ride, Mexican health authorities reined in on their red level Covid-19 status and dropped it to an orange level.

Back in the saddle, the riders advanced to Coronel Hill, where they tested their horsemanship as they approached steep embankments and descended into Rosarito Canyon. Knight said that he and his Infonort co-worker stood by and munched on Mexican pancakes at a tiendita (small store) by Bulevar 2000 before the police stopped incoming and outgoing Tijuana traffic for the horses.

“After the horses crossed the freeway, they walked down a long dirt road and reached the arroyo (dry creek), at the second historical borderline.”

Per the organizers’ Facebook: “In 1788, the Dominican Father Fray Luis Sales, founder of the Misión San Miguel Arcangel de la Frontera, found some indigenous ranches in what is now the city of Rosarito, negotiating to extend the Dominican border to the Arroyo de Barrabás.”

Across the dry creek was the final destination, where Crispín Garrido Mancilla, Knight’s co-worker at Infonort, continued: “At around 3:00 pm they began to arrive at the San Patricio Ranch, owned by the Machado Angulo family. In the holm oak tree grove, located on the slopes of Cerro Coronel, which is a known resting spot for horses and riders, there was music, food, and drinks. There were five musical bands, folkloric dance, free barbecue for all its attendees, and many made their own carne asada.”