Coronavirus patients are showing up in emergency rooms after calling 911 from the US-Mexico border.

“They’ll literally come to the border and call an ambulance,” says Van Gorder, president and CEO of Scripps Health, a hospital system in southern California.

The rise in ambulance traffic from the border, which several officials described to CNN, is a symptom of the pandemic’s spread in the region — and a sign of the many connections between communities in both countries.

“There just is not a wall for viruses at the border,” says Josiah Heyman, director of the Center for Inter-American and Border Studies at the University of Texas at El Paso. “The wall is an illusion, because the two sides are really woven together.

“An increase in cross-border coronavirus cases, which began getting public attention in May, overwhelmed some California hospitals and spurred the state to create a new patient transfer system to help.

“It’s an unprecedented surge across the border,” says Carmela Coyle, president and CEO of the California Hospital Association.

In the past five weeks, more than 500 patients have been transferred to hospitals across the state from California’s Imperial County, which has the state’s highest per capita rate of coronavirus cases — and, according to officials, has seen a large number of patients crossing from Mexico.

But Van Gorder, Coyle and other officials in California say this isn’t an immigration issue.

Most of the coronavirus patients crossing the border, they say, are Americans.

In a call with state hospital leaders earlier this month, the head of California’s emergency medical services authority, Dr. David Duncan, described the steady stream of patients coming to Imperial County as “gas on the fire.”

“We’ve got this continual flow of Covid coming across the border in the form of US citizens that carry and continue to escalate and fuel the Covid pressures that we see,” Duncan said.

The view from the border

Officials estimate about a quarter of a million US citizens live across the border in the Mexican state of Baja California. Many work in the US and have family members there. Some regularly go to US hospitals when they need medical attention. Others decided to cross this time because Mexican hospitals were overwhelmed by a crush of coronavirus cases.

“What has happened as the situation has worsened on the Mexican side of the line is that a number of the US citizens are returning to the United States to seek care for Covid-19,” says Coyle of the California Hospital Association.

Officials in Mexico’s Baja California state say the number of active coronavirus cases there are now declining. But the state — which is home to large cities like Tijuana and Mexicali — has been hit hard by the pandemic. With more than 1,700 dead, it’s among the Mexican states with the highest Covid-19 death tolls and death rates per capita. 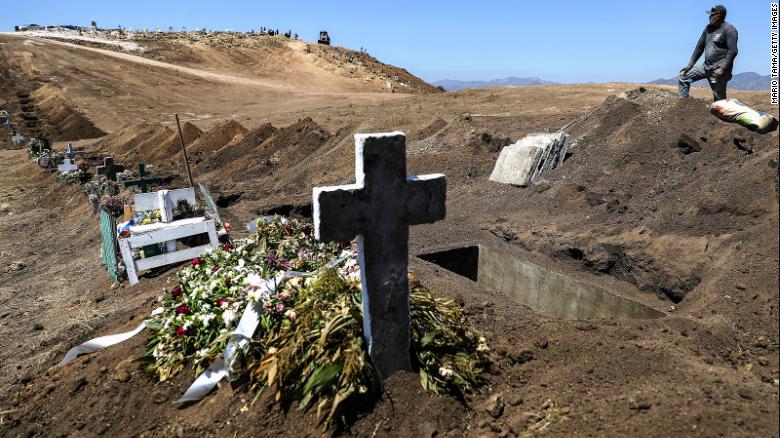 A cemetery worker takes a break from digging new graves at Tijuana Municipal Cemetery 13 amid the COVID-19 pandemic on May 11, 2020 in Tijuana, Mexico.

Sergio A. Beltrán, US Customs and Border Protection’s officer in charge for the Calexico ports of entry, said in a statement to CNN that he started to see an increasing flow of people coming across the border for medical care a few months ago.

“While it varies from day to day, and shift to shift, we have experienced a significant increase in medical-related calls at the Calexico ports of entry that can be directly linked to the COVID-19 pandemic over the last couple of months,” he said. “We’re definitely seeing people on a daily basis. And we still have our regular medical-related calls that aren’t COVID-related from people in accidents or having other medical issues and are coming for medical treatment in the US.

“Sometimes people walk to the port of entry or drive themselves to the border crossing, then call for an ambulance to get them to a US medical facility when they arrive. And sometimes, he said, travelers arrive at the border in Mexican ambulances and have already arranged for US ambulances to meet them there.

What happened in California hospitals as more coronavirus patients crossed

At El Centro Regional Medical Center in Imperial County, coronavirus cases started to climb in early May as the situation across the border in Mexicali worsened, says Adolphe Edward, the hospital’s CEO.

At one point that month, the 161-bed hospital saw so many coronavirus cases that it had to stop accepting any new patients in its emergency room.

Edward says he heard first-hand from his own staff one reason the numbers were going up.

“I’ve got over 60 staff members that travel back and forth every day. They live in Mexicali, but they come to work here,” he says. “They told me it took Mexicali a while to get to the point where they put (social distancing) restrictions. I think that’s one reason why the number is as high as it is now.” 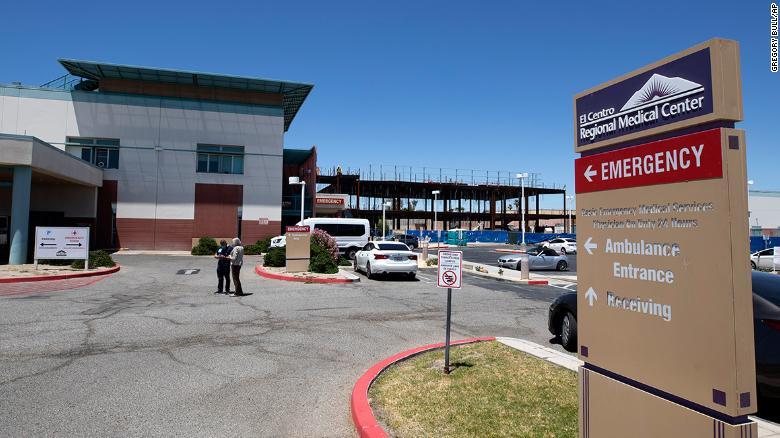 About 90 miles to the west, Scripps Mercy Hospital Chula Vista, which is across the border from Tijuana, was also seeing cases starting to climb.

Officials began tracking the travel histories of patients there, and quickly spotted a trend: Many had recently been in Mexico.

“About half the patients that are testing positive are indicating they’ve crossed the border within the previous week,” Van Gorder says.

“The patients that cross the border appear to be sicker than the patients that we’ve normally been seeing,” he says. “It may be that they waited in Mexico too long, or they went to a Mexican hospital and decided to get their care here.”

The flow of patients across the border has been steady for weeks, says Coyle of the California Hospital Association. And now hospitals across the state — including as far north as Sacramento — are taking in coronavirus patients from Imperial County as part of a new patient transfer system set up to ease the pressure, Coyle said.

A challenge across the region, she says, is that so many patients are sick with the same condition, requiring the same equipment for treatment, at the same time.

“That is what driving the shortages of service and supply in Mexicali, driving these expats back to the United States and then driving a very unique movement of patients into and more broadly across the state of California,” she says. “It’s almost like a waterfall cascading.” 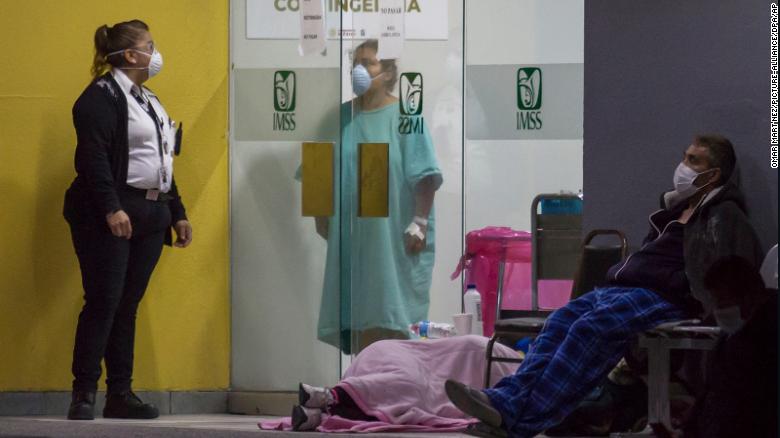 People wearing face masks wait outside an emergency room in Tijuana to be tested for coronavirus in April.

Even though the US-Mexico border has been closed to all but essential travel since March, thousands of people still cross daily.

Van Gorder says he’s concerned that officials are moving too quickly towards reopening.

“We still don’t have our arms completely around Covid and the Covid spread,” he says. “And as a border community, I think we have a double risk.”

On Friday Gov. Gavin Newsom said the percentage of positive coronavirus tests in Imperial County was so high that he was recommending that officials reinstate a stay-at-home order there. State officials have said US citizens crossing into California for medical care are among the factors driving the uptick. The governor said Friday that “it’s too early to tell” if the high number of cases in neighboring Arizona is also a contributing factor, adding that a “deep dive” study by the CDC is underway.

What’s happening in other parts of the border

Heyman, of the University of Texas at El Paso, says there’s one thing that’s important to remember about coronavirus — and other issues — along the vast US-Mexico border.

“The two sides can’t be kept separate,” he says. “If there’s a problem on one side of the border, it flows to the other side.

“In earlier days of the pandemic, Mexican officials expressed concern about travelers from the US bringing coronavirus into the country.

In the Mexican border city of Nogales in May, officials installed “sanitizing tunnels” that sprayed a disinfectant solution on people who’d just come from the US.

“I don’t know what they thought they were doing,” says Arturo Garino, the mayor of the sister city on the US side of the border, Nogales, Arizona. But Garino says he’s concerned about the flow of people traveling across the border, too. 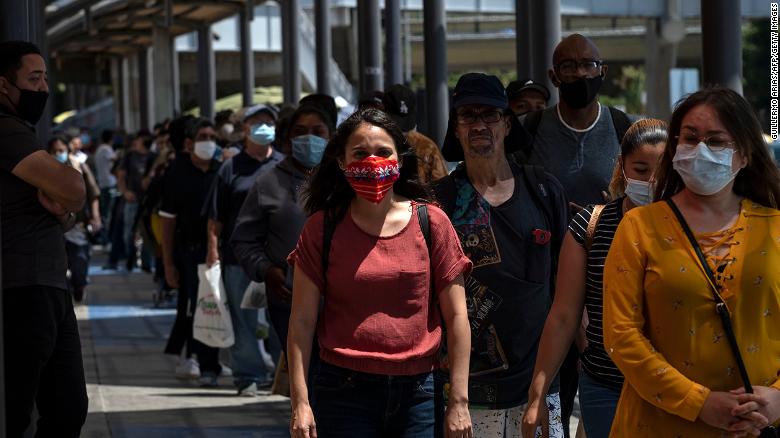 Commuters line up to cross to the United States at the San Ysidro crossing port in Tijuana on June 16, 2020.

While coronavirus cases are surging, particularly in two Arizona counties along the border — Santa Cruz and Yuma — Garino says officials haven’t pinpointed the cause.

Garino, who recently signed an order requiring people in his city to wear masks in public places, says he’s worried about the frequent cross-border travel that’s a part of daily life there intensifying the spread of the virus.

“I’m concerned because of the spike in cases that we have,” he says. “We’re trying to do our best to curb this virus, and we continuously keep on going up and up and up.”